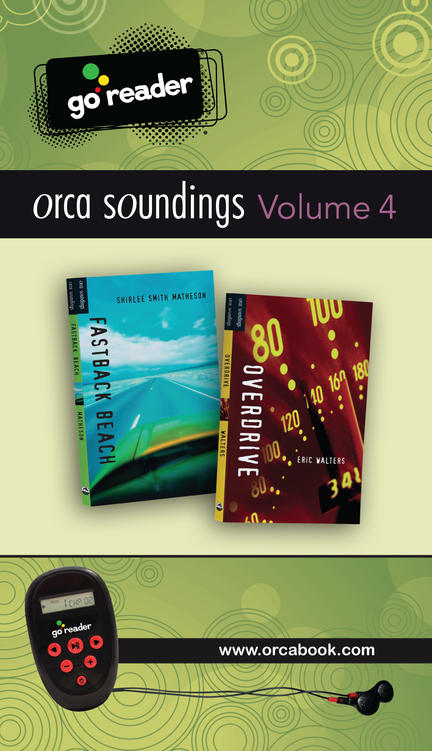 Arrives at your school or library ready to play

No downloads, CDs, or cassettes

Book details:
Fastback Beach by Shirlee Smith Matheson
Miles Derkach is in trouble. Along with two friends, he stole a car and went joyriding. When the dust clears, he is all alone and his friends have left, leaving him to take the blame—and the punishment—while maintaining his silence. Placed on probation and sentenced to community service, Miles begins working for a man who after suffering a stroke and not being able to drive, has kept his beloved hot rod under wraps in the garage. Seeing a chance to learn more about cars and pursue his dream of becoming a mechanic, Miles helps to restore the car. When the hot rod is stolen and Miles is the prime suspect, he realizes that he must confront his friends and stand up for himself.
Overdrive by Eric Walters
Jake has finally got his driver's license, and tonight he has his brother's car as well. He and his friend Mickey take the car out and cruise the strip. When they challenge another driver to a street race, a disastrous chain reaction causes an accident. Jake and Mickey leave the scene, trying to convince themselves they were not involved. Jake finds he cannot pretend it didn't happen and struggles with the right thing to do. Should he pretend he was not involved? Or should he go to the police?

Founded in 1984, Orca Book Publishers is an independently owned Canadian children's book publisher of award-winning, best-selling books in a number of genres. With over 800 titles in print and more than 80 new titles a year, Orca prides itself on publishing Canadian authors and bringing them to a wider market.

Other titles by Orca Book Publishers