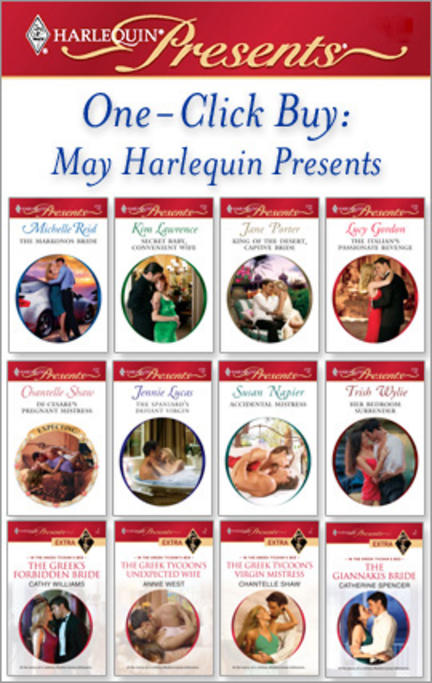 The drama is fierce and compelling, the sexual tension explosive...and the romance delectably satisfying. Harlequin Presents has it all...marriage of convenience, red-hot revenge, forced betrothal, passion among the rich and powerful...played against the romantic background of Mediterranean settings. Get twelve new scorching tales of passion and romance with one simple click of the mouse.
Bundle includes: The Markonos Bride by Michelle Reid, Secret Baby, Convenient Wife by Kim Lawrence, King of the Desert, Captive Bride by Jane Porter, The Italian's Passionate Revenge by Lucy Gordon, Di Cesare's Pregnant Mistress by Chantelle Shaw, The Spaniard's Defiant Virgin by Jenni Lucas, Accidental Mistress by Susan Napier, Her Bedroom Surrender by Trish Wylie, The Greek's Forbidden Bride by Cathy Williams, The Greek Tycoon's Unexpected Wife by Annie West, The Greek Tycoon's Virgin Mistress by Chantelle Shaw and The Giannakis Bride by Catherine Spencer.

Susan Napier is a former journalist and scriptwriter who turned to writing after her two sons were born. Born on St Valentine's Day, Susan feels that it was her destiny to write romances and, having written over thirty, she still loves the challenges of working within the genre. She likes writing traditional tales with a twist, and believes that to keep romance alive you have to keep the faith and believe in love of all kinds. Susan lives in New Zealand with her journalist husband.

In the past, Catherine Spencer has been an English teacher which was the springboard for her writing career. Heathcliff, Rochester, Romeo and Rhett were all responsible for her love of brooding heroes! Catherine has had the lucky honour of being a Romance Writers of America RITA finalist and has been a guest speaker at both international and local conferences and was the only Canadian chosen to appear on the television special, Harlequin goes Prime Time.

Chantelle Shaw enjoyed a happy childhood making up stories in her head. Always an avid reader, Chantelle discovered Mills & Boon as a teenager and during the times when her children refused to sleep, she would pace the floor with a baby in one hand and a book in the other! Twenty years later she decided to write one of her own. Writing takes up most of Chantelle’s spare time, but she also enjoys gardening and walking. She doesn't find domestic chores so pleasurable!

Annie West has devoted her life to an intensive study of tall, dark, charismatic heroes who cause the best kind of trouble in the lives of their heroines. As a sideline she researches locations for romance, from vibrant cities to desert encampments and fairytale castles. Annie lives in eastern Australia between spectacular sandy beaches and gorgeous wine country. She finds writing the perfect reason to avoid housework. To contact her or join her newsletter, visit www.annie-west.com .

Cathy Williams is a great believer in the power of perseverance as she had never written anything before her writing career, and from the starting point of zero has now fulfilled her ambition to pursue this most enjoyable of careers. She would encourage any would-be writer to have faith and go for it! She derives inspiration from the tropical island of Trinidad and from the peaceful countryside of middle England. Cathy lives in Warwickshire her family.

By the time Trish Wylie reached her late teens, she already loved writing and told all her friends one day she would be a writer for Harlequin. Almost two decades later, after revising one of those early stories, she achieved her dream with her first submission! Despite being head-over-heels in love with New York, Trish still has her roots in Ireland,  residing on the border between Counties Fermanagh and Donegal with the numerous four-legged members of her family.

Kim Lawrence was encouraged by her husband to write when the unsocial hours of nursing didn’t look attractive! He told her she could do anything she set her mind to, so Kim tried her hand at writing. Always a keen Mills & Boon reader, it seemed natural for her to write a romance novel – now she can’t imagine doing anything else. She is a keen gardener and cook and enjoys running on the beach with her Jack Russell. Kim lives in Wales.

Jennie Lucas's parents owned a bookstore and she grew up surrounded by books, dreaming about faraway lands. At twenty-two she met her future husband and after their marriage, she graduated from university with a degree in English. She started writing books a year later. Jennie won the Romance Writers of America’s Golden Heart contest in 2005 and hasn’t looked back since. Visit Jennie’s website at: www.jennielucas.com

Michelle Reid grew up on the southern edges of Manchester, the youngest in a family of five lively children. Now she lives in the beautiful county of Cheshire, with her busy executive husband and two grown-up daughters. She loves reading, the ballet, and playing tennis when she gets the chance. She hates cooking, cleaning, and despises ironing! Sleep she can do without and produces some of her best written work during the early hours of the morning.

Lucy Gordon cut her writing teeth on magazine journalism, interviewing many of the world's most interesting men, including Warren Beatty and Roger Moore. Several years ago, while staying Venice, she met a Venetian who proposed in two days. They have been married ever since. Naturally this has affected her writing, where romantic Italian men tend to feature strongly. Two of her books have won a Romance Writers of America RITA® Award. You can visit her website at www.lucy-gordon.com.

Jane Porter loves central California's golden foothills and miles of farmland, rich with the sweet and heady fragrance of orange blossoms. Her parents fed her imagination by taking Jane to Europe for a year where she became passionate about Italy and those gorgeous Italian men! Jane never minds a rainy day – that's when she sits at her desk and writes stories about far-away places, fascinating people, and most important of all, love. Visit her website at: www.janeporter.com

Other titles by Catherine Spencer

A Valentine from Harlequin: Six Degrees of Romance

A LITTLE CORNER OF PARADISE

A NANNY IN THE FAMILY

CHRISTMAS WITH A STRANGER

Other titles by Chantelle Shaw

Other titles by Annie West

Other titles by Cathy Williams

Other titles by Kim Lawrence

Other titles by Jennie Lucas

Other titles by Jane Porter

A Marriage of Convenience Romance