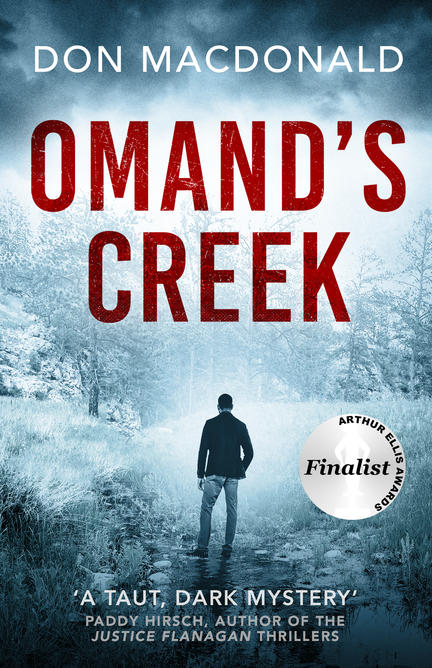 A young woman has been brutally murdered, her body left on the banks of Omand’s Creek. Similarities with a murder a month earlier lead Detective Michael Shelter to believe he’s dealing with a killer preying on sex workers in Winnipeg’s large Indigenous community. He soon realizes he’s facing a far more cunning adversary than he’d imagined.

As he races to find the killer, Shelter uncovers a trail of corruption, racist violence and long-held secrets that reach into the city's elite. Along the way, he struggles to raise his defiant teenage daughter as a single father and come to terms with the reality of racism in the city and his own blind spots.

Don Macdonald was born and raised in Winnipeg and now lives in Montreal. He worked for over 20 years as a print journalist in Winnipeg, Montreal and Quebec City.

Shelter glanced at Gabriel Traverse, slouched in the passenger seat with his hands folded on his stomach. They were heading downtown, five kilometres in a straight-line west on Portage Avenue. Shelter wished he’d kept in the kind of shape Traverse was in, but between work and caring for his daughter, trips to the gym and a healthy diet had gone out the window. Raised on a reserve on the west side of Lake Winnipeg, Traverse was in his mid-30s with jet-black hair that was shaved at the sides and spiked with gel on top. He wore a checked short-sleeve shirt and Levi’s. Shelter wondered why his partner wasn’t running through the details of the crime scene as he normally would at this point. He was silent, brooding. They’d been going day and night on the Monica Spence case, working dead-end leads until they’d slowly dwindled to nothing. In the last week, the grind had been made worse by the heat and humidity. Shelter had noticed Traverse’s jokes taking on a nasty edge, and he slipped into silences more often.
“What’s up?” Shelter asked.
“Nothing. I’m just sick of it.”
“MacIsaac? Don’t let him get to you.”
“Nah, the whole thing. That woman.”
Shelter looked at his partner. “You’re tired. We all are.” Shelter understood Traverse’s frustration. He felt overwhelmed by it at times himself. So many Indigenous women murdered, their bodies found in a rundown apartment, on a riverbank or in some vacant lot. And each time it would start again: the media, the heartbroken family, the accusations they didn’t work Indigenous cases as hard as white ones. What would it take to stop the cycle?
He steered the car into a parking garage beside a grim bunker known as the Public Safety Building, where chunks of the crumbling limestone façade routinely fell off, making it one of the most dangerous addresses in the city.
He tossed his briefcase on his desk in the squad room on the second floor and called the sergeant in charge of the crime scene. After a brief conversation, he hung up the phone and turned to Traverse. “Nothing so far from the scene. Until we get something from the medical examiner, I want to concentrate on seeing if there’s any video, especially from buses on Portage.” All city buses had video cameras pointed toward the street in front of them. “Let’s see if there’s a shot of a vehicle turning into that lot after Jay’s closed.”
Turning back to his desk, Shelter felt a knot of anxiety grow in his stomach. The murders seemed to be connected, and that suggested they might be dealing with a killer who was preying on Indigenous women, someone who would strike again. He knew, now more than ever, his every move would be under a microscope by higher-ups in the department, the media and Indigenous groups. Traverse was naturally self-assured, confident in his abilities and decisions. Shelter wasn’t built like that. A doubt about how he’d handled some detail would sometimes bring him out of a deep sleep. Then he would lie awake, replaying his actions during the previous day and thinking about what the morning would bring. His wife, Christa, would reassure him that all the worrying and obsessing over details was what made him a good cop. “Gordy Taylor believes in you, Mike. And he’s the chief of police,” she’d said during a particularly difficult case when he was pulling sixteen-hour shifts. But she wasn’t there to support him anymore — cancer had taken her the year before.
Now, he felt fear eating at his gut and realized it wasn’t about how the bosses or the media were going to react. What if he’d missed something, made some mistake in the Spence investigation, and another young woman had paid for it with her life?

"Macdonald has achieved something that will resonate wherever it is read. Omand’s Creek is the best Canadian crime debut in recent memory." - The Montreal Gazette, January 22, 2021

Macdonald expertly crafts a gripping mystery in which each clue and false lead builds to a devastating final set of revelations. - The BookLife Prize

"A taut, dark mystery. Even world-weary detective Michael Shelter is surprised by the depravity and corruption he uncovers investigating a case that will keep readers riveted and guessing, right to the end." Paddy Hirsch, author of the Justice Flanagan thrillers.