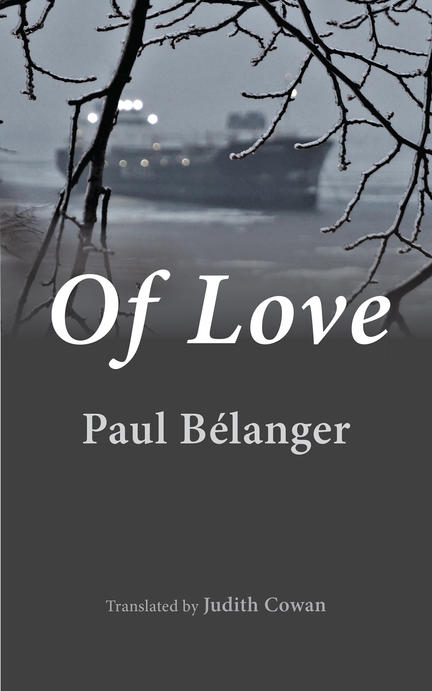 With echoes of Jacques Brault, Simone Weil, Baudelaire and Petrarch, in Of Love, Paul Bélanger continues his poetic quest for the sources of spiritual ecstasy. In this "body of song," the quest includes a series of distinct women as representatives of the Muse: an exciting black woman; a woman met in a poignant one-time encounter; a medley of women with “a variety of skins,” who speak “the strangest of languages”; a lady for whom he lives out an epistolary passion; and finally a woman who is dying.

Paul Belanger, poet and editor, has been nominated for the Governor General’s Award for Poetry on three occasions, most recently for the French edition of Meridian Line (Origine des méridiens). He teaches creative writing at the University of Quebec and is the publisher of les Éditions du Noroît.He lives in Montreal, Quebec.

Judith Cowan was born in Nova Scotia, but grew up in Toronto. She graduated from the University of Toronto with a B.A. in Modern Languages and Literatures. She received an M. A. in French literature from the University of Toronto, followed by an M. A. in English literature from York University. She received a Ph. D. in Canadian Comparative Literature from L’Université de Sherbrooke, Québec, and went on to teach literature in English at L’Université du Québec à Trois-Rivères until the end of the twentieth century.Her stories have appeared in a number of literary magazines, including Quarry Magazine, Queen’s Quarterly, The Malahat Review, The Fiddlehead, and The Antigonish Review. In French translation, they have also been published in Liberté, XYZ : la revue de la nouvelle, and L’Atelier du Roman (Paris). She was one of the original contributors to Ellipse magazine, where she has published English translations of individual poems by many Québec poets. She is the only English-language writer in Trois-Rivières, Québec.

Other titles by Paul Belanger

Other titles by Judith Cowan

The Permanent Nature of Everything

For As Far as the Eye Can See