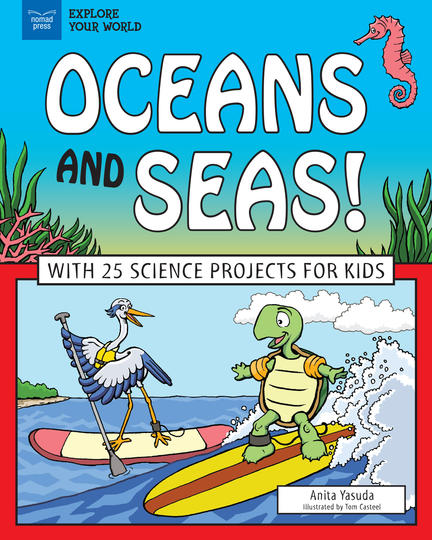 Why is the ocean important for humans and for the Earth?

Did you know that the ocean covers 70 percent of the surface of the earth? And scientists have only explored a very small part of it!

In Oceans and Seas! With 25 Science Projects for Kids readers ages 7 though 10 dive into the underwater world of some of the most amazing landscapes on Earth. On this amazing underwater adventure, kids experience the ocean’s tropical reefs and spot crabs, sea sponges, and thousands of kinds of fish darting in its crags and folds. They’ll meet a giant squid with eyes the size of dinner plates and an umbrella-like bioluminescent jellyfish.

Through fun facts, engaging illustrations, links to primary sources, timeline, glossary, and resources, readers will be challenged to think about how ocean creatures and plants survive and depend on each other from the sunlit surface to the seafloor, where sunlight does not exist. Student-led STEAM activities, such as building a submarine and creating an ocean in a bottle, use the framework of the scientific method to reinforce learning and enhance critical and creative thinking skills as kids learn about efforts to conserve these incredible creatures and their habitats.

Oceans and Seas! is part of a set of four Explore Waterways books from Nomad Press. In the Explore Waterways set, readers ages 7 to 10 learn about the waterways of our world, including the what, where, how, and who about the origination, content, and aquatic life that water contains. Through science-minded STEAM projects and experiments that encourage readers to think of waterways as part of a larger ecosystem, kids develop critical and creative thinking skills about the role waterways play in our world.
Titles in the Explore Waterways set include Marshes and Swamps! With 25 Science Projects for Kids; Lakes and Ponds! With 25 Science Projects for Kids; Oceans and Seas! With 25 Science Projects for Kids; and Rivers and Streams! With 25 Science Projects for Kids.
Nomad Press books in the Explore Your World series for children ages 7–10 integrate content with participation. Common Core State Standards, the Next Generation Science Standards, and STEM Education all place project-based learning as key building blocks in education. Combining content with inquiry-based projects stimulates learning and makes it active and alive. Nomad’s unique approach simultaneously grounds kids in factual knowledge while allowing them the space to be curious, creative, and critical thinkers.

Anita Yasuda was (gasp) a girl who couldn’t keep out of her local Sanrio Gift Gate. An avid collector of Japanese pop memorabilia from the 1970s, including textiles and anime, she made friends with Hello Kitty*R while a schoolgirl in Japan. She is the author of Japanese Children’s Fabrics: 1950s-1970s and Japanese Anime Linens: 1970s to Present, both for Schiffer Publishing, Ltd.

Green Teacher Magazine
"This resource by Anita Yasuda, illustrated by Tom Casteel, brings the traditional textbook into the world of the tech-savvy youth. Most suitable for Grades 4–6, the book allows learners to explore the marine world’s history, biology, oceanography, and conservation problems and solutions. The layout of the book supports diverse inquiry approaches, including reading, questioning, experimenting, and researching via scanned QR codes. A useful template for using the scientific method is provided, and science journaling is encouraged. The emphasis on scientific literacy, with a "words to know" section and a strong glossary, is valuable."

Other titles by Anita Yasuda