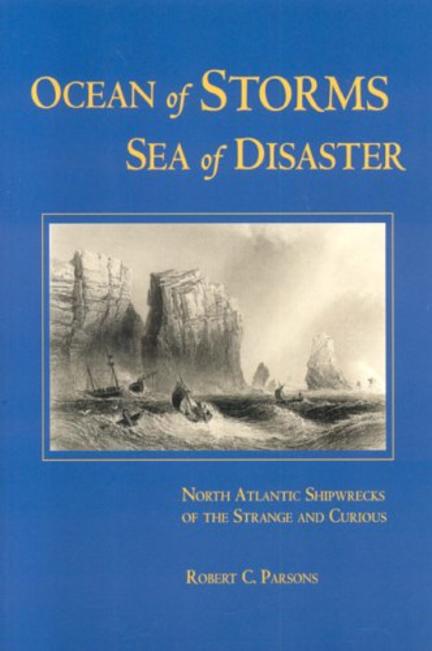 Here are over sixty stories of piracy, fire, explosions, disappearances, rum running, shipboard mutiny and murder. There are also stories of collisions with whales, icebergs and other ships, as well as wrecks on rocks, islands and sand bars. Vessels, large and small, were struck by lightning, shelled or torpedoed by enemy vessels, crushed by Arctic ice, and even swallowed up whole by unexpected intense gales and hurricanes. These true tales of shipwrecks delve into strange and curious marine disasters. The setting, primarily the northwestern Atlantic Ocean, was the main trading route for passenger steamers and treading schooners plying their way to and from Europe and also the site of the much frequented fishing grounds. It is said to be the "stormiest ocean on earth." The time range in Ocean of Storms, Sea of Disaster is one hundred years, between the 1850s and the 1950s but the stories themselves are timeless.

Robert C. Parsons has been called one of the most popular and prolific writers on the subject of Atlantic Canada’s ships and ship disasters. He is the author of more than twenty-five non-fiction books. His work has also appeared in a number of newspapers and magazines such as Downhome, the Telegram, the Newfoundland Quarterly, and Newfoundland Lifestyles.In May 2009, Robert’s nonfiction prose was judged an award winner in the annual Arts and Letters Competition.In December that same year, he was presented with the Polaris Award from the Canadian Coast Guard Alumni Association, Newfoundland and Labrador division, in recognition of his outstanding contribution to the preservation and public awareness of the marine heritage and history in the province of Newfoundland and Labrador. This award was only given out two previous times in the years of the Alumni Association’s existence.Robert’s book Courting Disaster: True Crime and Mischief on Land and Sea was a Globe and Mail bestseller.A former fish plant worker and educator and a present-day researcher and devotee of all items marine-related, Robert lives in Grand Bank, Newfoundland.

Other titles by Robert C. Parsons

Stories of the North Atlantic

Sail the Wild Seas: Stories of the North Atlantic

Stories of the North Atlantic

Heroes of the Sea

Stories from the Atlantic Blue

Murder on the Rock

True Crime in Newfoundland and Labrador

Newfoundland Sailors in the Great War

Stories from the Coast that Sank the Titanic