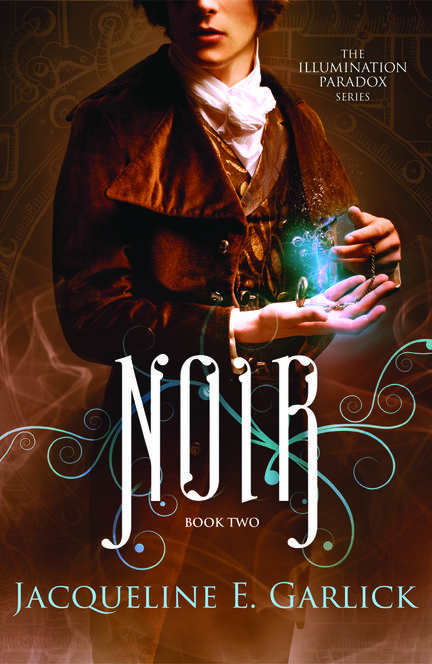 Losing him would make her overcast world one shade darker…

Navigating her way through nightmarish lands devoid of sunlight, Eyelet Elsworth races to free her beloved Urlick Babbit, the first person to understand and accept her—differences and all. Framed for murder and sentenced to execution, Urlick is running out of time. And the Commonwealth’s tyrannical new ruler, Penelope Rapture, is strangely eager to speed up the clock.

Aided by a band of unusual yet loyal associates, Eyelet stumbles upon a startling rumor. And as she unravels a secret that could challenge Penelope’s claim to the throne, Penelope vows to divert Eyelet’s journey—straight to a dark and deadly end.

In Noir, the second thrilling addition to Jacqueline E. Garlick’s Illumination Paradox series, familiar friends struggle against new and old enemies, shocking secrets come to light, and the truth that could save this captivating steampunk world is revealed…if it doesn’t destroy everything first.

Jacqueline E. Garlick loves strong heroines, despises whiny sidekicks, and adores good stories about triumphant underdogs. A teacher in her former life, she’s now an author of the very books she loves to read: young adult, new adult, and women’s fiction. Lumière, the first novel in her Illumination Paradox series, won the prestigious 2013 LYRA award for Best Young Adult Novel and an Indie B.R.A.G. Medallion. The book also received the title of B.R.A.G. Medallion Honoree. Jacqueline lives in a house with a purple wall or two, and dreams of one day having a hidden passageway that leads to a secret room. Visit her website at www.jacquelinegarlick.com.

Other titles by Jacqueline E. Garlick