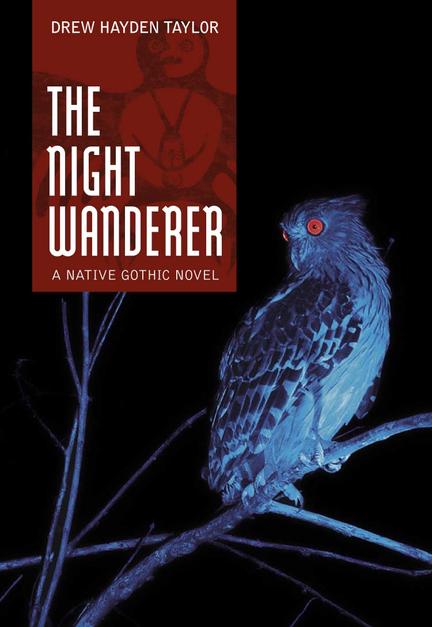 Nothing ever happens on the Otter Lake reservation. But when 16-year-old Tiffany discovers her father is renting out her room, she’s deeply upset. Sure, their guest is polite and keeps to himself, but he’s also a little creepy.

Little do Tiffany, her father, or even her astute Granny Ruth suspect the truth. The mysterious Pierre L’Errant is actually a vampire, returning to his tribal home after centuries spent in Europe. But Tiffany has other things on her mind: her new boyfriend is acting weird, disputes with her father are escalating, and her estranged mother is starting a new life with somebody else. Fed up and heartsick, Tiffany threatens drastic measures and flees into the bush. There, in the midnight woods, a chilling encounter with L’Errant changes everything ... for both of them.

A mesmerizing blend of Gothic thriller and modern coming-of-age novel, THE NIGHT WANDERER is unlike any other vampire story.

Drew Hayden Taylor has done many things, most of which he is proud of. An Ojibway from the Curve Lake First Nations in Ontario, he has worn many hats in his literary career, from performing stand-up comedy at the Kennedy Center in Washington D.C., to being Artistic Director of Canada’s premiere Native theatre company, Native Earth Performing Arts. He has been an award-winning playwright (with over 70 productions of his work), a journalist/columnist (appearing regularly in several Canadian NEWSpapers and magazines), short-story writer, novelist, television scriptwriter, and has worked on over 17 documentaries exploring the Native experience. Most notably, he wrote and directed REDSKINS, TRICKSTERS AND PUPPY STEW, a documentary on Native humour for the National Film Board of Canada.

“Teens who devour vampire fiction will enjoy this unusual slant on the oft-told legend.”

Other titles by Drew Hayden Taylor

Indigenous Views on the Future

Acts of a Gentrified Ojibway Rebellion

Take Us to Your Chief

Dead White Writer on the Floor

Crees in the Caribbean

The Best of Funny, You Don't Look Like One