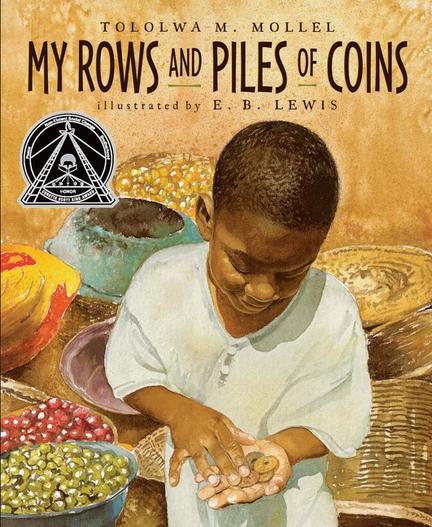 “I emptied my secret money box, arranged the coins in piles and the piles in rows . . .” The market is full of wonderful things, but Saruni is saving his precious coins for a red and blue bicycle. How happy he will be when he can help his mother carry heavy loads to market on his very own bicycle—and how disappointed he is to discover that he hasn’t saved nearly enough! Determination and generosity are at the heart of this satisfying tale set in Tanzania and illustrated with glowing watercolors that capture the warmth of Saruni’s family and the excitement of market day.

Tanzanian-born Tololwa Mollel is a children's author, dramatist and storyteller. His books include The Orphan Boy, Rhinos for Lunch and Elephants for Supper and Big Boy. He lives in Edmonton, Alberta.

"Mollel (Song Bird, p. 226, etc.) sets this tale of a thrifty Maasai child who reaps an unexpected reward in the Tanzania of his childhood. Young Saruni saves his coins for a long time, hoping to buy a bicycle so that he can help his mother carry more goods to market, only to discover that new bicycles are far more expensive than he thought. Along with Saruni, readers or onlookers can count the neatly stacked piles of coins as they grow, and in the meantime enjoy Lewis's realistically rendered landscapes and dusty market scenes. In the end, Saruni's father teasingly ''sells'' him the old family bicycle, then hands the money back; characteristically, a happy Saruni immediately begins thinking of buying a cart to tow behind the bike. The characters shine in this well and simply told tale, with its neatly, but not too deeply, buried lesson."
Kirkus Reviews

"Mollel draws on his own Tanzanian childhood for this story of a boy, Saruni, who works hard, saves all his coins for months and months, and dreams of buying a bicycle--only to discover that he does not have nearly enough money. Many children will relate to what it's like to save, plan, and count towards a dream ("I emptied the box, arranged the coins in piles and the piles in rows. Then I counted the coins and thought about the bicycle I longed to buy"). As in his stunning watercolors for Echewa's The Magic Tree: A Folktale from Nigeria , Lewis' paintings root the story in the particulars of the contemporary village and landscape. Through the child's eyes, the scenes move from the busy market, where Saruni helps his mother, to his home among the coffee trees, and to pictures of him wobbling and falling as he learns to ride his father's bicycle every day after school.... The pictures quietly express (the boy's) bond with his mother in workand in love."
Booklist

"A warm family story contains several universal childhood experiences: the pride in persevering and gaining a new skill and in making an unselfish contribution to the family. . . . the fluid, light-splashed watercolor illustrations lend a sense of place and authenticity. Watching Saruni's savings mount visu-ally is a nice touch. . . . Deft and effective." School Library Journal, Starred

"In an ending that makes this selfless hero an inspiration to readers, Saruni contemplates using his savings to buy a cart to pull behind his bike, to further lighten the loads his mother must carry. Lewis's engaging and lifelike paintings convincingly portray a range of images and emotions, including the verdant Tanzanian landscape and bustling marketplace, and, most affectingly, the strong bond between this boy and his loving parents." Publishers Weekly, Starred

Other titles by Tololwa M. Mollel

Financial literacy is part of the new math curriculum for grades 4-6. But why not start even sooner, as young as kindergarten?