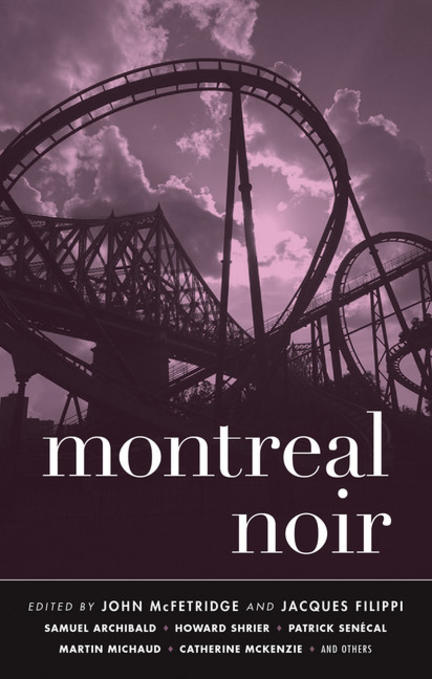 Akashic Books continues its groundbreaking series of original noir anthologies, launched in 2004 withBrooklyn Noir. Each story is set in a distinct neighborhood or location within the city of the book.

Montreal is noir, the birthplace of Leonard Cohen, Saul Bellow, Michel Tremblay, Mordecai Richler, and Oscar Peterson. It's unsettling, it's subversive, it's palpable, but it's never obvious. Montreal's long history is dominated by cultures coming together, almost. And coming apart, almost. And continuing, always. Here, French and English writers explore the underside of the Sin City of the north.

From the introduction by John McFetridge & Jacques Filippi:

One of the oldest cities in North America, Montreal seems to be in a constant state of flux, changing its personality every few decades. Today Montreal has its own language, Franglais (or Frenglish), and maybe the first word spoken in that language wasnoir...
This collection, with voices of French and English writers, visits many neighborhoods and combines them into something that is, if not totally coherent, at least as coherent as the beautiful mess that is Montreal...Each neighborhood is different, and of course, each Montrealer (MontrÃ©alais) is different, making up the pieces of the mosaic of our city. Some are bright and shiny, others are darker and somber, but all have a shadow in the noir. 2017 marks Montreal's 375th birthday, and we're pleased to add this collection to the literary life of an amazing city.

John McFetridge co-authored Below the Line with Scott Albert, who, like John, had spent many years working in the film industry. John is also the author of the Toronto Series crime fiction novels Dirty Sweet, Everybody Knows this is Nowhere, and Swap. He has written the screenplays The Shrew in the Park and The Protector, the CBC radio drama, Champions, as well as episodes for the CBS/CTV television series The Bridge. John lives in Toronto.

Other titles by John McFetridge

Every City Is Every Other City

Black Rock, A Little More Free, and One or the Other

One or the Other

Includes the novels Dirty Sweet, Everybody Knows This Is Nowhere, and Swap