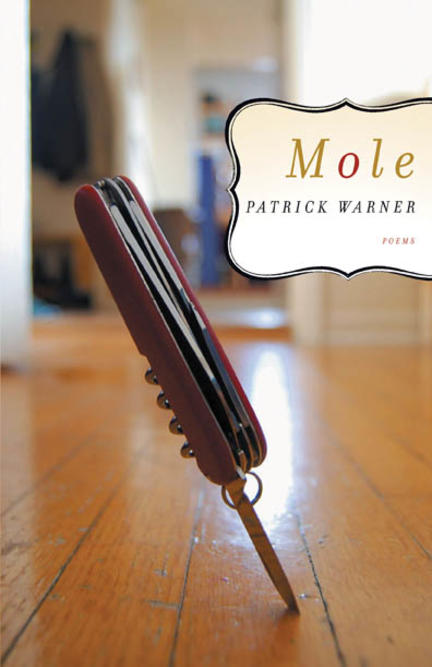 How does the embrace of levity -- that warm, human voice, perceptive of its own limits -- find its way to the listener in today's shattered world? By blind burrowing? Heat fluctuations in loam and subsoil? Instinct and luck?

Much like the mole of the title, Patrick Warner's poems accomplish great feats of imagination, exposure, empathy, and insight, disguised all the while as pleasingly modest creatures of accident and stealth. As with all the very best poets, Warner can take overlooked corners and negligible objects and turn them into prisms, portals, tuning forks, and flint rocks. A bracing, perpetually pleasing work from one of Canada's most celebrated poets.

In 2007, Patrick Warner won the E.J. Pratt Poetry Prize Award for his collection, There, there. His first collection of poetry, All Manner of Misunderstanding, was nominated for the 2002 Atlantic Poetry Prize and for the 2003 Newfoundland and Labrador Book Awards. His work has been published in TickleAce, The Fiddlehead, Matrix, Signal, the Sunday Telegram (St. John's), Poetry Ireland Review, and Metre (Ireland). He lives in St. John's, Newfoundland.

It's his sense of rhythm and rhyme, and often internal rhyme - a debt to his Irish predecessors rather than Canadian ones - that convey the pure and simple lyricism of his poems. And there's a downhome quality, as well, through which Warner observes the world with an urbane wit - a rare feat in Canadian poetry. Easily the strongest of these three books, Mole is entertaining and diverse when compared to the dryness of Langer and Solie.

Some poets have the ability to take the mundane or often uninteresting and through a rebranding in depth and metaphor present to the reader something fresh and attention-grabbing. Patrick Warner has just this talent and throughout his new collection, Mole, creates an assortment of vignettes that draw on everyday happenings.

There must be something about Eastern Canada that lights a fire in well-rounded poets like Patrick Warner...Like a beam from a lighthouse, wherever Warner fixes his poetic gaze, he exposes the jagged rocks in the seemingly placid shallows.

...the ordinary becomes extraordinary when seen through Warner's rose-coloured, resort-town lenses...Endearingly childlike and whiskered in wildness, these are the verses of a tough-meat world that when set to Warner's musical sensibility, emerge tender-nosed and curious.

Other titles by Patrick Warner

All Manner of Misunderstanding