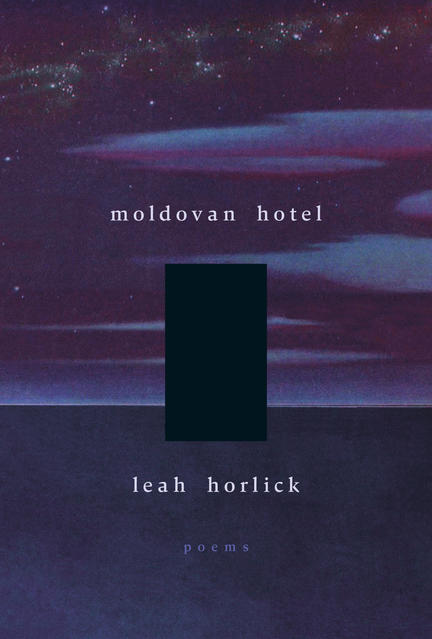 Moldovan Hotel explores the intergenerational trauma of the Holocaust in Romania through a queer Jewish voice in the Diaspora.

In 2017, Leah Horlick travelled to Romania to revisit the region her Jewish ancestors fled. What she unearthed there is an elaborate web connecting conscious worlds to subconscious ones, fascism to neofascisms, Europe to the Americas to the Middle East, typhus to HIV/AIDS, genocide in Romania to land grabs in Palestine, women's lives in farming villages to queer lives in the city, language to its trap doors, and love to its hidden, ancestral obligations.

With force, clarity and searing craft, Horlick's poems are equal to the urgency of our political moment. "No one ever thinks they might be the dragon," Horlick writes, and yet history repeats its cruelties. This work takes things apart to put them profoundly back together.

"If Leah Horlick's second book invited us to witness, this time she draws from her Jewish heritage and takes us back to show us how to read the landscape and mind-scape and tell us what the texts left out. This is an accounting, a calling, an invocation, a return, a skilful mediation on how to remember when the ‘names of the oppressors are blotted out’." — Juliane Okot Bitek, author of 100 Days

"Every poem in Moldovan Hotel is a room thick with ghosts. Here, Horlick takes the language of the past—used to dehumanize and unmoor—and crystalizes it around revelation after revelation. A graceful, striking collection." — Carmen Maria Machado, author of In the Dream House

Leah Horlick grew up as a settler on Treaty Six Cree territory and the homelands of the Métis in Saskatchewan. Her first collection of poetry, Riot Lung (Thistledown Press, 2012) was shortlisted for both a ReLit Award and a Saskatchewan Book Award. In 2016 she won the Dayne Ogilvie Prize, Canada's only award for LGBT emerging writers. That same year, her second collection, For Your Own Good (Caitlin Press, 2015), was named Stonewall Honor Title by the American Library Association. In 2018, her piece "You Are My Hiding Place" was named Poem of the Year by ARC Poetry Magazine and shortlisted for inclusion in the 44th Pushcart Prize by the Pushcart Board of Editors. She lives in Calgary.

The ancestors of everyone I’ve let into my body
are gathered in a small room with one window,
no lights. Yes, the room is crowded. Yes, there
are no chairs. Yes, they are talking–why are we
here, says the Nazi resister. Where are the chairs,
says the Viking (no horns). Where is the light, say
the people with their new French name hung
around their necks heavy like a long black cross.
Here, says the grand wizard, and a long white
light descends from a point from the ceiling.
The people of the oldest empire are here, too,
they have brought their own fire (hidden), they
too can speak French, they know in an instant not
to trust that light. They are opening the window.
How do we get away from these people, they
murmur. True Aryans! say the Nazis with their
new French name. No one is speaking
to the Catholics. There is a knock on the door–
there is a door. More Nazis. How did this happen?
Outside the open window there is a small huddle
of shawls and feet and candlesticks, a suitcase
and a cane. Someone has forgotten their things,
says the Nazi resister. The candlesticks turn into
my great-grandmother, their tarnish to coal smears,
the cane grows tall into my great-zayde, the shawl
his mother, suitcase an uncle with an aunt inside.
The feet are just empty shoes–my cousins have
already died. The small huddle of my family outside
the open window begins to sink to a great distance,
first one storey, then a long drop. Someone spits
through the open window. My great-zayde
shields his face. Great-grandmother looks up.
What are those people, she says, doing
in that room?

No one ever thinks they might be
the dragon.

Everyone wants to swing the
lance around, divine stomp.

A legion names itself
protector, prince among angels—

nested in green
shirts, scales on a beast.

Calls itself iron. Declares its task
guarding. Another legion

wraps itself in yards and yards of cloth,
whispers the name of that very

is confounded—intervenes
and appears, yanks humans out of the mouth

of the eternal lion as fast
as they throw themselves

in. Archistrategos is a web of light pulled
in the directions of his sparks. Starts

one fire. Beseeched to put it out again. Covers his ears,
leaves red handprints. Nobody thinks

they could ever be the serpent.
Who is like God?

Other titles by Leah Horlick

For Your Own Good