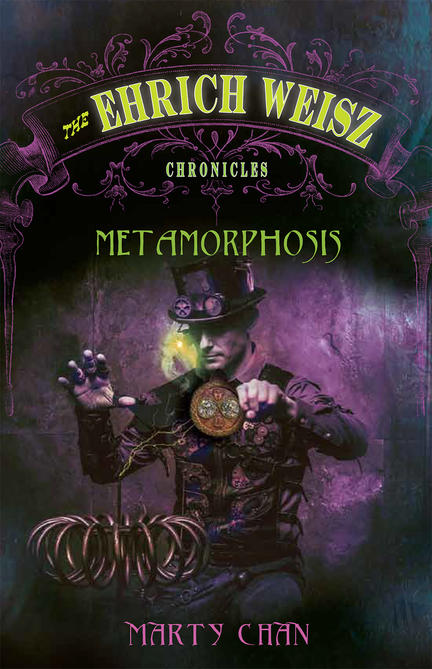 In this third, and final book of the Ehrich Weisz Chronicles, Ehrich must make good on his promise to his brother Dash that they will return to their home dimension from their current position in the alternate New York, where immigrants are not just from different lands — but from different dimensions. When an attack by the Dimensionals kills passengers and crew of the airship Oriental Clipper, Demon Watch Commissioner Thomas Edison promises to electrocute 54 Dimensional, unless Ehrich and his friends can stop him, while thwarting warlord Ba Tian's planned invasion of New York.

"Metamorphosis includes quite an assortment of villains including one fiend, Ole Lukoje, whose favorite food is human eyeballs. Our heroes prevail in the final battle, and the trilogy comes to a satisfactory conclusion. The tale is particularly current with its description of the treatment by the local inhabitants of the dimensional refugees who are only seeking a better life.
"Metamorphosis is a novel for readers who enjoy complex plots, steampunk settings, and plenty of action. The author makes an effort to provide some background in the early part of the book, but this is one trilogy where it is a definite advantage to read the books in published order to be best able to follow the tale's twists and turns and track the characters who were introduced in the earlier volumes.
Recommended"
— CM Magazine