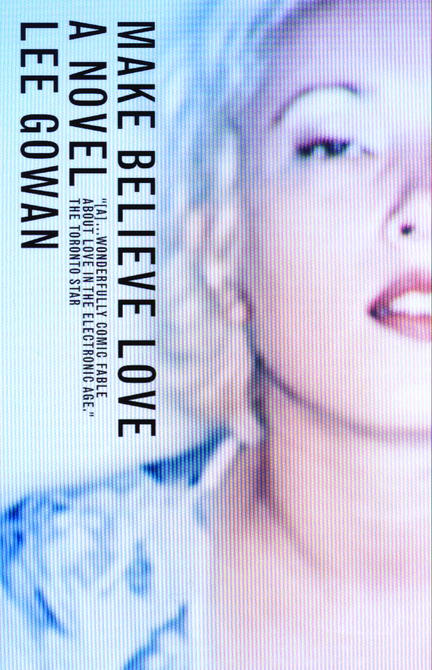 A stalker, a journalist and a librarian converge in small-town Saskatchewan in this brilliantly quirky and entertaining novel of love, obsession and the pursuit of fame.

Broken Head has only one famous resident, and Joan Swift, the local librarian, is about to find out all about him. Darwin Andrew Goodwin hails from nearby Venus, Alberta, and is renowned for stalking Stephanie Rush, a Canadian-born starlet who lives in L.A. with her movie director husband. We learn all about Goodwin's obsession from Joan, and when Joan begins her own sultry affair with Jason Warwick, a new arrival from Toronto who is a reporter for the local newspaper, The Standard, the stage is set for a story filled with surprises.

To spice up small-town life even more, Joan, who bears a striking resemblance to Stephanie Rush, agrees to impersonate the starlet as part of Jason's plan to write a book. Their hope is to entice Goodwin into telling his side of the story to the look-alike. And when Goodwin is charged and Joan shows up in court dressed as Stephanie, the town starts to buzz with rumour and speculation, and Goodwin's own extraordinary tale of love is told.

Lee Gowan grew up on a farm in Swift Current, Saskatchewan. He has published short stories and poetry in numerous periodicals and has twice been nominated for National Magazine Awards. He currently teaches writing at the University of Toronto’s School of Architecture. He lives in Toronto.

If you drive west on the Trans-Canada Highway, through a million miles of Precambrian Shield, the great red rocks clawing straight through the earth to confront you with the fact you’ve already crossed beyond the beginnings of your kind and into the lush and smoky world before history; and yet you keep driving, winding your way west to where the land flattens and trees begin losing ground to clearings where farms and tractors hold what can only be temporary dominion over the great forest; and still you drive, until you find yourself passing through the most relentless landscape on the face of the planet, burnt grass and stubble and assorted shades of brown stretching away on either side of a highway that runs straight into the sky, the blinking yellow centre line threatening to murder you by hypnotizing you into a messy sleep; and yet you persist in your going, perhaps deluded into believing you have reached the unfinished edge of the world and are about to make a significant discovery by dropping into the abyss that Columbus’s crew so greatly feared–if you drive west on the Trans-Canada Highway, eventually you’ll come to a spot on the map called Broken Head, Saskatchewan, just another Prairie town dying from complete lack of culture and too much interbreeding, a place with absolutely no significance beyond the fact that Darwin Andrew Goodwin once picked up his mail at the post office on Main Street.

And if–perhaps after a lunch of deep-fried breaded meat and lumpy gravy and powdered mashed potatoes slopped onto a cold plate and shared with a waitress who insists on telling you all about her children’s latest diseases or the plot of her favourite soap opera–if you then head south on a secondary highway, away from the last vestiges of what some might laughably refer to as civilization, and you turn west again on the Hochfeld Grid, named for a disappeared community of Mennonite settlers who, a century ago, were conned by the Canadian government into coming to this godforsaken place, you will be following the same route that RCMP Detectives Brock and Frazier took on the morning of May 12th, 199—, when they arrived with a search warrant at the Goodwin farm to seek out documentary evidence that would prove Darwin Andrew Goodwin had murdered Stephanie Rush.

What they found was the Goodwin forest: acres and acres of Scotch pines planted in a grid of squares measuring exactly a hundred yards on each side. (Goodwin was never an advocate of the metric system.) A driveway bisecting the rigidly ordered woods led the two officers into a kind of courtyard in the centre, where a few corrugated steel sheds were surrounded by rows of antiquated machinery, the parts supply for the ancient combine harvester and swather and tractors that Goodwin still used to farm the land he hadn’t already turned over to the trees. When the detectives walked through one of these coniferous walls they found a hundred square yards of open clearing, overgrown with dead grass and weeds. They stood for a moment, looking around. The space the trees created gave them an eerie feeling of being audience to nothing in an empty and unused arena.

They did not realize they were witnessing evidence of Goodwin’s great love for Stephanie Rush–Hollywood sex symbol, tabloid icon of the seventies, the Province of Alberta’s most celebrated daughter–who had so recently and cruelly passed from this vale of tears. Goodwin planted the trees for her: as spokeswoman for the Sierra Club, Stephanie Rush had urged him, in countless thirty-second spots, to do his part to help save the rain forest.

Investigating further, they found another square of pines occupied by a decaying farmhouse. As they climbed the front steps Detective Brock’s foot broke through the top plate, and Detective Frazier remembers him limping slightly for the rest of the day. Their knock brought no response, but upon entering they were attacked by an elderly woman their report describes as “armed with a television antenna of the rabbit ears variety.” The woman, Goodwin’s mother, was raving about aliens from other planets preparing to take over the world.

Again the detectives missed the clue. Stephanie Rush was originally from Venus, a village in Alberta.

Having concluded that questioning Mrs. Goodwin would be fruitless, the detectives made a tactical retreat. They stood in the yard, surveyed the situation, and noticed a telephone line running from the southwesterly corner of the house off into the woods; not toward the road, as you would expect, but in the opposite direction. A single wire was strung on either side of each pole, the lines attached to each cross arm at a green glass insulator. These rows of crucifixes once filed in procession along seemingly every Prairie road, but they had completely disappeared when all the phone lines were buried by SaskTel over a decade before.

Following the line a quarter of a mile through four or five squares of pines–some of them completely empty, some storing scrap metal or more rusting machinery or piles of weathered lumber–the detectives discovered the end of the line at a prefab bungalow that would not have looked out of place in any suburb in Middle America. What made it look out of place in that particular clearing–what might have made it remind them of the cottage that Hansel and Gretel stumbled across, though it was not made of gingerbread–was that it was so well tended: recently painted, and the flowerbeds all weeded and groomed. A white picket fence marked the boundaries of a perfect green lawn.

On this occasion Detectives Brock and Frazier did not overlook the evidentiary significance of their find: they realized at once that this was the legendary house Goodwin had built for Stephanie Rush; as such, it could well prove important to their mission of gathering documentation, circumstantial or otherwise, that would link Mr. Goodwin to Ms. Rush’s untimely passing.

"It is easy to forget, sometimes, that writers write because they are in love with words, their endless combinations, their energy, their echoes, the clues they might provide. In Make Believe Love, Lee Gowan reminds us." —Bonnie Burnard

“Gowan makes some marvellous observations about small- and large-town life [told with] wry, insider wit. [The] tension between what is and what seems to be – unrequited love or scary obsession, fame or notoriety, truth or history – is at the core of this strong first novel.” — Quill & Quire
“Make Believe Love is lively and entertaining.” — National Post
”Wonderfully comic [with] a quintessentially Saskatchewan touch.… [Gowan] evokes the province in amusing yet loving detail. A fable about love in the electronic age…a romp [with a] breezy style, zippy dialogue and lightly drawn characters.” — The Toronto Star
“Extraordinary…. Make Believe Love arrives as a sly look at modern day celebrity, a whimsical indictment of hero worship in our society, a guileless attack on our obsessions wit fame, a satirical fable for the new millennium…. Gowan handles the comedy deftly…. A quirky read. With his scattergun plot twists and eccentric characterizations, Gowan owes a sizeable debt to American cult favourite Tom Robbins. To his credit, the novel works on many levels. As a caustic critique on celebrity in our times, Make Believe Love is the real deal.” — The Hamilton Spectator
“[A] smart and funny first novel…a lightly caustic comedy that has some startlingly dark things to say about love, intimacy and self-delusion…. Gowan exhibits a sure hand with plotting…. But the most appealing aspect of his writing here is how he sidesteps the sterotypes readers have about the sort of people and places that are scattered across the Prairies.” — Eye Weekly
“[An] offbeat tale…. The characters he creates…are highly imaginative, and the twists and turns the plot takes are more so. [A] fast-paced story…. Gowan sketches in a carefully drawn sense of place…. Engaging.” — The Star Phoenix (Saskatoon)

“[Gowan] writes with a clean, crisp style and an engaging, well-paced narrative….[An] entertaining read.” — Winnipeg Free Press
“A promising debut…. Gowan’s command of language, his sense of place, his subject matter all make him a writer worth watching–and his main character, Joan Swift, is hard to forget. Most of all, she’s believable even when you’re not sure you believe her.” —The Gazette (Montreal)
“The book is quirky, entertaining and beautifully conveys the languorous atmosphere of the prairie landscape.” — Anne Tobin, Halifax Chronicle-Herald, 1 Apr 2001

“The real pleasures of this book are the dark wit and often striking perceptions that spill from Joan’s pen as she attempts to get real, and get even.” — Jim Bartley, Globe and Mail
“Make Believe Love is a comedy that refuses to get cynical or mean. Its daffy story and evenness of temper evoke some of Canadian fiction’s past accomplishments, such as the small-town sketches of early Robertson Davies by way of…Maragret Atwood’s…Lady Oracle…Lee Gowan’s debut is funny and laid-back…shot through with affection…”
— Vancouver Sun

Other titles by Lee Gowan