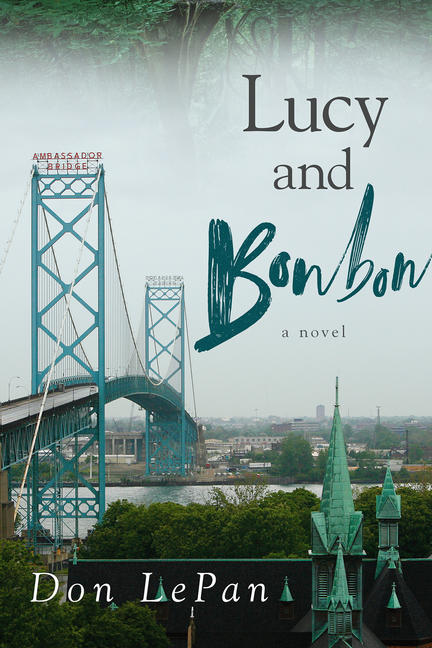 Probing the question: "Are we ready to accept a human-ape hybrid in our midst?"

What if humans were able to reproduce with other great apes? What would the hybrid offspring look like? Act like? Think like? And how would humans respond? Would such creatures be allowed to live among us? Or would they be put under a microscope in a zoo or research facility? Lucinda Gerson is an outspoken, free-spirited working-class single mother. Lively and unpredictable, she’s the sort of person you might call “one of a kind.” Her child Bonbon is quite literally one of a kind. When Lucinda spends the money she has inherited from an uncle on a trip to visit her anthropologist sister in the Congo, she comes back pregnant. Lucy and Bonbon is the story of mother and child, and of the controversy that swirls around them over the course of the child’s first fourteen years. It is a story of freedom and captivity, of love and friendship, of borders and of border crossings, and of what it means to be a human animal.

Don LePan, founder and CEO of academic publishing house Broadview Press, is the author of several non-fiction books and of two other works of fiction; his novel Animals (2010) has been described by Nobel Prize winner J.M. Coetzee as “a powerful piece of writing and a disturbing call to conscience.”

… a fascinating exploration of ideas. The prose is a joy to read and the two main characters are unforgettable. In Bonbon, the ‘hybrid,’ LePan has created a voice that is intelligent, self-aware, empathetic and observant, and the fact that he views humanity from both the inside and outside offers an amazing perspective. Lucy and Bonbon is compulsively readable as it builds to its extraordinary and thought-provoking conclusion.

Deborah Willis, author of The Dark and Other Love Stories and Vanishing

Lucy and Bonbon unfolds in intriguing stages, each one with characteristics true to the genre. Though the novel’s irreverent conceits — bestiality, unnatural spawn — are the foundation of the premise and might provoke the torches-and-pitchforks crowd, a trio of storytelling techniques energizes Don LePan’s unique tale. Variously breakneck, inquisitive, and literarily playful, Lucy and Bonbon showcases an author who’s as assured with Big Questions as with the nuts and bolts of complex narration.

I greatly enjoyed Lucy and Bonbon. At first something of a novel of ideas, it turns into an exciting escape drama, with a sting in the tail, a surprise look into the unknown future. It leaves the reader wanting a sequel!

Richard Dawkins, University of Oxford; author of The Selfish Gene, The God Delusion, and Science in the Soul

Lucy and Bonbon is a remarkable achievement. Don LePan raises extremely important ethical and philosophical issues, and weaves them into an intriguing story with a page-turning finish.

Peter Singer, Princeton University / University of Melbourne; author of Animal Liberation, The Life You Can Save, and Ethics in the Real World

Other titles by Don LePan

The Broadview Anthology of British Literature Volume 4: The Age of Romanticism - Third Edition

The Broadview Pocket Guide to Writing: A Concise Handbook for Students - Fourth Edition

The Broadview Guide to Writing: A Handbook for Students - Sixth Edition