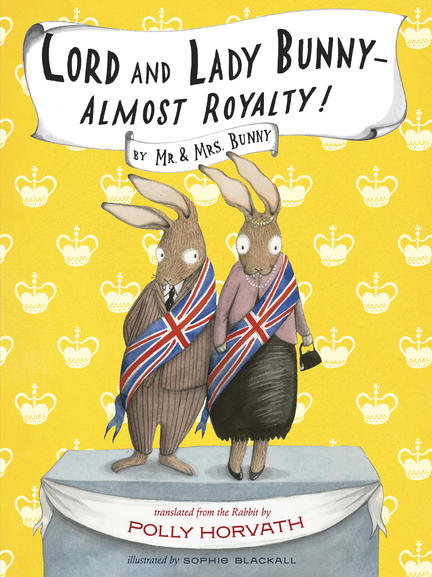 Literature’s most endearing rabbits are back in this sequel to Mr. and Mrs. Bunny — Detectives Extraordinaire! While the Bunnys' human friend, Madeline, worries about saving money for college, Mrs. Bunny is more concerned about how to become a queen.

Unexpectedly, Madeline’s family inherits a sweet shop (candy store!) in England, and it looks for a while as if everyone’s problems are solved. England proves to be full of eccentric characters, strange customs, and even royalty — but holding onto money is difficult for Madeline’s family, and becoming a queen proves harder than Mrs. Bunny had expected.

Lord and Lady Bunny is written by Mr. and Mrs. Bunny,* translated from the Rabbit by multi-award-winning author Polly Horvath, and beautifully illustrated by Sophie Blackall. It’s a sequel that children will laugh over and love.

* Mr. and Mrs. Bunny lives in Rabbitville in the Cowichan Valley on Vancouver Island, British Columbia. They have twelve children.

Polly Horvath is one of the most highly acclaimed authors writing today. Her books include The Canning Season (winner of the National Book Award and the CLA Young Adult Book Award), Everything on a Waffle (a Newbery Honor Book, an ALA Notable Book and winner of the Mr. Christie's Book Award and the Sheila A. Egoff Children's Literature Prize), The Trolls (a National Book Award finalist), My One Hundred Adventures (a School Library Journal Best Book of the Year, a Booklist Editors' Choice, a Kirkus Reviews Best Children's Book of the Year and winner of a NAPPA Gold Award and the Sheila A. Egoff Children's Literature Prize), and Northward to the Moon (an Oprah's Book Club Kids' Reading List selection and winner of a Parents' Choice Gold Award). Her most recent book is Mr. and Mrs. Bunny — Detectives Extraordinaire!

Exploits abound, including hedgehog disguises (quills and superglue) and trained magical candy shops. Horvath holds all of this folly together with affectionate characterizations, dazzling wit, and an unflagging commitment to the winding narrative, with Blackall’s familiar ink-and-wash sketches embellishing the tone of skewed bemusement.

The plot is unapologetically preposterous, but the truly witty banter, near-constant conflict and palpable love between Mr. and Mrs. Bunny are both genuinely affecting and uproariously funny. Blackall’s elegant, expressive black-and-white illustrations add whimsy to an already effervescent adventure.

[A] meticulously crafted sequel . . . One can only hope that Mr. and Mrs. B. have loads more madcap adventures to share with audiences — both bunny and human.

Other titles by Polly Horvath

One Year in Coal Harbour

Northward to the Moon

My One Hundred Adventures

M Is for Mountie