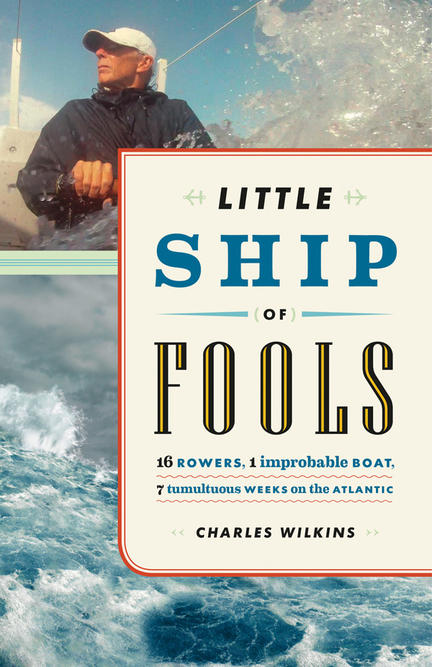 The dramatic and hilarious story of risk and survival, as well as the importance of our connections to the planet, on a human-powered journey across the ocean

It was to be an expedition like no other—a run across the Atlantic from Morocco to Barbados aboard an experimental rowboat. There would be no support vessel, no stored water, no sails or motor. The boat's crew of sixteen included several veterans of U.S. college rowing, a number of triathletes, a woman who had rowed both the Atlantic and Indian Oceans, and a scrawny sexagenarian looking for a last great challenge—our chronicler, Charles Wilkins.

When he joined the expedition, Wilkins had never swung an oar in earnest. Accompanied by a devoted crew of misadventurers, Wilkins takes the reader along for seven weeks of rationed food, extreme sleep deprivation, and life-threatening seas—as well as sharks, whales, and an ever-disintegrating boat. Little Ship of Fools is a rich and fascinating story of courage, community, the importance of risk in our lives, and the resilience and depth of the human spirit.

Charles Wilkins wrestled Don Starkell's mountainous diary into the classic work of adventure travel Paddle to the Amazon, praised by The New York Times Book Review as "a model expeditionary journal." The winner of three National Magazine Awards, two American Magazine Association awards and The Gregory Clark Outdoor Writing Award, he has also been a finalist for the Writers' Trust Non-Fiction Prize, the Stephen Leacock Medal for Humour, the Trillium Book Prize and the Toronto Book Award. His acclaimed non-fiction includes In the Land of Long Fingernails, The Circus at the Edge of the Earth and Walk To New York, and he is the co-author with Gordie Howe of the bestseller After the Applause. He divides his time between Thunder Bay and Muskoka, Ontario.

Infused with wit, charm, and a sense of wonder, the playful but epic tale stands as a testament to the human spirit stripped bare by the power of nature. — Booklist

"An inspiring read and a great adventure tale." —The Library Journal

Rarely have I been so drop-jaw riveted by a book, so won over by a writer's chops and heart, so happy to be dry. — Mary Roach, author of Stiff and Gulp

Other titles by Charles Wilkins

In the Land of Long Fingernails

High on the Big Stone Heart

And Further Adventures in the Boreal Heartland

Dispatches From The Wild Heart Of Canada

Breakfast at the Hoito

And Other Adventures in the Boreal Heartland