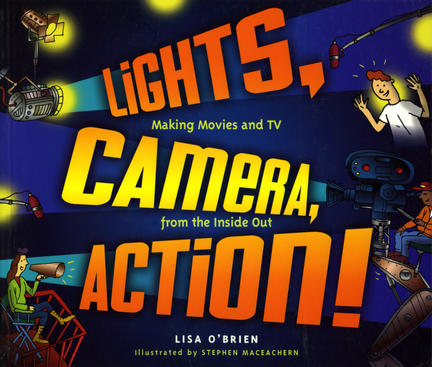 There really is no business quite like show business. Behind all the glitz and glamor of the stars is a dizzying world of savvy agents, picky casting directors, “big picture” producers, and bustling production teams. How do young, aspiring actors make it onto movie and TV screens? Lisa O’Brien, a seasoned creator, writer, and TV producer, takes readers behind the scenes in Lights, Camera, Action! There’s a lot to know about show biz: how auditions work, getting an agent, honing your craft, and understanding how a movie is made. Budding actors will learn to identify the qualities and characteristics of a good actor, understand how an idea becomes a screenplay and how a movie’s cast is chosen, find out how agents help actors land parts and how to approach an agent to represent you, learn how to prepare for an audition and what to expect when you get there, and much more! Whether you’re dreaming of the big screen, hoping to ham it up on a TV sitcom, trying out for the school play, or just interested in the amazing world of movies and television, Lights, Camera, Action! will start you in the right direction.

LISA O'BRIEN is an experienced writer, producer, and creator of children’s television shows, including those airing on the Disney Channel and Fox Kids. Over the last year, she has been creating campaigns and short form programming for the 24-hour pre-school channel PBS Kids Sprout. Originally from Fredericton, NB, she lives in Los Angeles, CA.

Stephen MacEachern attended Sheridan Institute for animation and illustration and has taught in the illustration program there. He is a Web and print designer as well as an illustrator. He has illustrated more than ten children's books. He lives in Erin, Ontario.

The Business of show business can be tricky, filled with pitfalls — especially for young actors. Lights, Camera, Action! gives kids and their families very practical and professional advice to help them understand how the industry works.

...the kind of book you'll want to refer to again and again.

This book would be most helpful for aspiring actors who want to be in pictures.

I wish I would have had a book like this when I was younger! It is so helpful to be savvy to the realities of Film/TV Production: from learning what 'sides' are to meeting the crew, to even editing and special effects.

Enjoy the pictures, read valuable tips, learn ‘screen speak,’ answer trick questions and have a blast. The process of film-making can be so much fun with this book’s guidance. Lights, Camera, Action! is a valuable resource for actors and parents who may have a star on their hands. But most importantly, kids will enjoy the step-by-step process and tips and tools of the trade in these colorful pages.

Lights, Camera, Action! is a terrific book that gives kids and their families a clear, concise snapshot of the film and television industry with lots of useful information about how to pursue a career in film or TV.

What a great guide! It's an easy to get, fun yet thorough explanation of every aspect of the entertainment business. Lisa O'Brien lays out all the details in a clear, simple way that a child can understand. Which means that everyone in my business should read it.

Lights, Camera, Action! is an excellent resource for those interested in working in movies and television, but also for simply understanding the process involved…Highly recommend[ed].

It is packed with extremely valuable information for anyone interested in the craft of acting and movie making. I've been performing since I was very young — and I learned tons from this book!

The numerous interviews, examples and fast facts in the Popcorn Quizzes provide a lot of interesting and relevant information for students who are fascinated with the media. Recommended.

Other titles by Stephen MacEachern

A Crazy Adventure in Time

18 Amazing Ways to Freak Out Your Friends

Kids Guide to Money Cent$, The