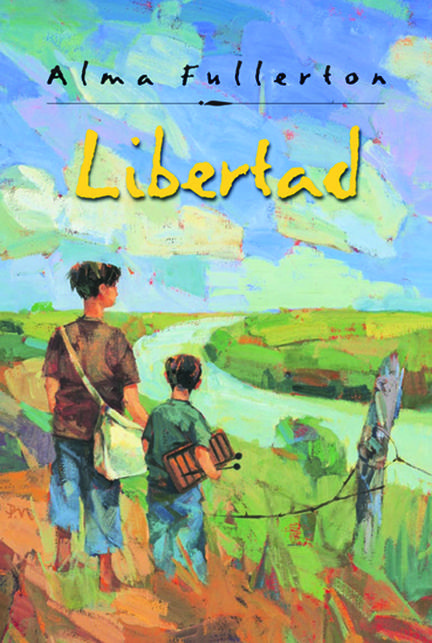 With their father gone to America to make money for his family, Libertad, his little brother Julio and their mother scrape a living out of a dump in Guatemala City. Although it is too late for him, Libertad is determined that his little brother should go to school. Taught to play the marimba by his father, Libertad uses his talent as a street musician to raise enough money for his brother's school supplies. But his dreams for their future are destroyed when their mother is killed in a freak accident. Libertad must face the inevitable truth; they cannot survive on the streets of Guatemala City alone. There is only one thing to do. They must set out on the long and lonely journey to the Rio Grande River, where they plan to cross the water and enter the United States to find their father.

A moving story about determination and hope, Libertad is a stunning free verse novel by the author of In the Garage and Walking on Glass.

Alma Fullerton was born in Ottawa Ontario, as one of seven children. Her dad was in the military so they moved when his postings changed, first to Trenton when she was two, then to Comox when she was twelve. Being dyslexic, she couldn’t read until grade four and didn’t enjoy reading at all until grade nine, when she discovered books that she really loved. Now that she is as an award-winning author, Alma visits schools to teach children that they, too, can overcome any obstacle.Her first three books are: In the Garage (2006); Walking on Glass (2007), which was named to the 2008 YALSA Quick Pick list; and Libertad (2008), which has won and been nominated for many awards, including the 2008 Governor General’s Literary Award for Children’s Literature (finalist), the 2009 TD Canadian Children’s Literature Award (finalist), the 2009 Ruth & Sylvia Schwartz Children’s Book Award (winner), the 2009 CLA Children’s Book of the Year Honor Book, the 2009 Golden Oak Award (winner), the 2009 Once Upon a World Children’s Book Award (winner), and the 2010 Silver Birch Award (shortlist).

"Young people of all ages will be intrigued and affected emotionally by this exceptional story."
— Winnipeg Free Press

"Alma Fullerton creates two characters who wend their way into the reader's heart with a story that will have even the most reluctant reader forging forward with them to a better future."
— The Brandon Sun

"The suspense is real and though readers may question some of the choices Libertad makes along the way, they will celebrate his perseverance and ultimate success. With realistic detail and well-paced suspense, this survival story is a good choice for reluctant readers."
— The School Library Journal

"The spare free verse is uneven but still packed with heartrending images of desperation and squalid poverty that will be eye-opening to young readers. Libertad's fierce love for his brother is deeply moving and based on the story of a real boy's journey combined with other children's actual experiences. Although there are some contrivances and loose ends, this short yet evocative tale will attract readers."
— Booklist

"Fullerton does not underestimate the dangers faced by her fictional characters: although occasionally helped out by a few generous souls, the boys elude predators of various kinds, narrowly escape permanent membership in the street gang in Mexico City, and nearly drown in the Rio Grande. The details of their ordeal are clear and precise, and it is obvious that the book has been a labour of love. It is a well-told adventure story, but it is also a record of injustice overcome and a lament."
— Canadian Literature

"This novel in verse is a heart-wrenching, emotional look at two brothers and their dog, and their quest to reach their father. Their naivety is evident, and the poverty, even seen through the eyes of the young boys is immense and overwhelming. Despite the blight of the main characters, however, this is a story of hope. . . All Middle School libraries should have novels like this as part of their collections. Fans of Deborah Ellis will enjoy this novel, and even students who are wary of novels in verse will find this read enthralling.
Rating: Excellent."
— Resource Links

Libertad, a finalist for the 2008 Governor General’s Literary Award for Children’s Literature, involves the reader in the intense journey of two young brothers who strive to find a better life.

Written in free verse, the story is told by Libertad, the eldest of the brothers. They live and work with their mother in appalling circumstances in a dump in Guatemala City. Their father lives in the United States. Just as Libertad manages to get his brother, Julio, signed up for school, tragedy strikes. Libertad describes the horror of his mother being bulldozed into a garbage pile. Her body is not recovered. The boys’ quest to find their father begins.

The route from Guatemala to the United States is fraught with danger. The boys face a lot of nasty challenges, but the love they have for each other doesn’t waver. The help they receive from some strangers is heartening.

Author Alma Fullerton explains at the back of the book that this is a fictional story based on actual experiences and situations. It may open discussion of homelessness, children’s rights, immigration, and what can be done to help children in similar circumstances around the world.

Using verse to tell the story works. A lot is said in fewer words than in a standard novel. The poignancy of the situations and emotions are well expressed, perhaps making this novel best suited to more mature readers.

Because Fullerton chose to tell her story in verse, it gives an opportunity to explore alternative methods of storytelling. Verse and poetry are often thought of as difficult mediums. Libertad shows that it can be very accessible and effective.

After their mother’s tragic death, Libertad and his little brother leave their home near the Guatemala City Dump to head out on a long and dangerous journey to cross the border to the United States and find their father.

Other titles by Alma Fullerton

When the Rain Comes