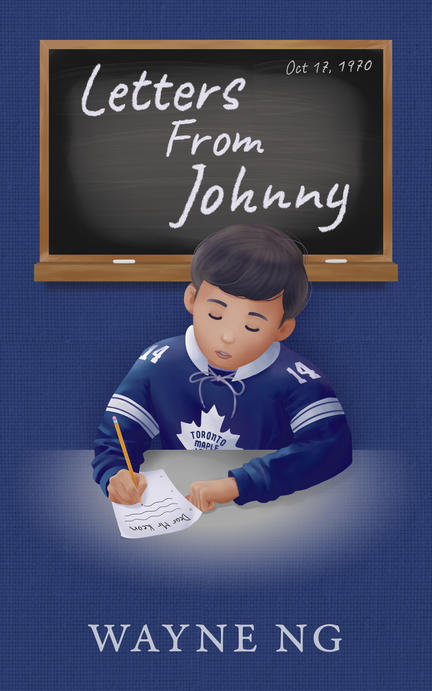 Set in Toronto 1970, just as the FLQ crisis emerges to shake an innocent country, eleven year old Johnny Wong uncovers an underbelly to his tight, downtown neighbourhood. He shares a room with his Chinese immigrant mother in an enclave with American draft dodgers and new Canadians. He is befriended by Rollie, one of the draft dodgers who takes on a fatherly and writing mentor role. Johnny's mother is threatened by the “children's warfare society.” A neighbour is found murdered. He suspects the feline loving Catwoman next door and tries to break into her house. Ultimately he is betrayed but he must act to save his family. He discovers a distant kinship with Jean, the son of one of the hostages kidnapped by the FLQ who have sent Canada into a crisis. As his world spins out of control, his only solace are letters to Dave Keon, who “as Captain of the Toronto Maple Leafs, can be trusted.”

I love this book a lot. Its voice—Johnny Wong, Grade 5, 1970—is one we’ve never heard before, expressed, eventually, in letters to Leaf captain Dave Keon. There’s sports here, but don’t let that give you pause. Letters From Johnny is as much about growing up as a first-generation Canadian as it is Toronto in the 70s with its team, its Chinatown, its new cultures trying to be heard above the Protestant din.

Dave Bidini, author of Keon and Me

Wayne Ng has the uncanny knack of being able to project himself into a child’s head to tell readers the child’s story—not an easy feat. Johnny is an engaging character going through a rough patch in life and Wayne brings that to life with a voice that is both accurate and convincing.

Rick Blechta, award-winning author of the Pratt and Ellis series

Not only will [readers] appreciate the cultural themes mentioned above, but the story takes them back not only to an era of crisis in our Canadian history but also an era of sports and entertainment which many will remember... Ng has captured the voice of a young boy, and his doing so allows us to share his worries and fears along with his hopes and dreams.

Poignant, insightful, and tinged with menace. Letters from Johnnydeftly captures the confusion and hurt of eleven-year-old Johnny Wong as he grapples with loyalty, friendship, and murder close to home.

While this voice and format will appeal to younger readers, the universal themes of a search for identity and a need to belong will resonate with anyone who never quite felt understood or that they belonged. Moreover, the novel will also draw in legions of Toronto Maple Leaf diehard fans, Canadian history buffs and lovers of off-beat immigrant stories. In essence, this is an adult fiction/YA crossover.

Who knew that a Chinese-Canadian kid’s heartwarming letters to his hockey hero could so perfectly capture Canada in 1970? Letters From Johnny takes us from the FLQ crisis and a shocking neighborhood crime, to the simple heartbreak of being a Maple Leafs fan. Wayne Ng brings us the world of Johnny Wong, as the 11-year-old pours out his fears, hopes, and dreams to his new pen pal, Leafs legend Dave Keon.

Other titles by Wayne Ng