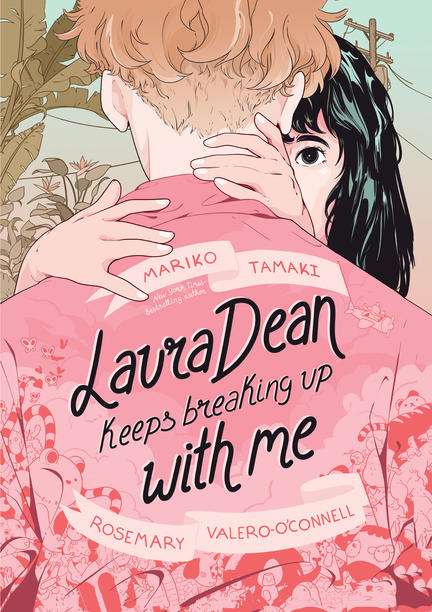 From This One Summer co-creator Mariko Tamaki comes a hilarious and poignant story of teen heartbreak and friendship.

All Freddy Riley wants is for Laura Dean to stop breaking up with her. The day they got back together was the best one of Freddy’s life, but nothing’s made sense since. Laura Dean is popular, funny and SO CUTE … but she can be really thoughtless, even mean. Their on-again, off-again relationship has Freddy’s head spinning — and Freddy’s friends can’t understand why she keeps going back.

When Freddy consults the services of a local mystic, the mysterious Seek-Her, she isn’t thrilled with the advice she receives. But something’s got to give: Freddy’s heart is breaking in slow motion, and she may be about to lose her very best friend as well as her last shred of self-respect. Fortunately for Freddy, there are new friends, and the insight of advice columnist Anna Vice, to help her through being a teenager in love.

Mariko Tamaki and Rosemary Valero-O’Connell bring to life a sweet and spirited tale of young love that asks us to consider what happens when we ditch the toxic relationships we crave to embrace the healthy ones we need.

CCSS.ELA-LITERACY.RL.5.2
>Determine a theme of a story, drama, or poem from details in the text, including how characters in a story or drama respond to challenges or how the speaker in a poem reflects upon a topic; summarize the text.

CCSS.ELA-LITERACY.RL.5.3
Compare and contrast two or more characters, settings, or events in a story or drama, drawing on specific details in the text (e.g., how characters interact).

CCSS.ELA-LITERACY.RL.6.1
Cite textual evidence to support analysis of what the text says explicitly as well as inferences drawn from the text.

ROSEMARY VALERO-O’CONNELL has done work for DC Comics, BOOM! Studios, CAPY Games and Mondo Tees, among others. Her work has been recognized by the Society of Illustrators and shown in galleries both locally and internationally.

It’s a special work, as we might expect from inspirational Canadian creator Mariko Tamaki and the elegant, accessible art style of Rosemary Valero-O’Connell. But the best part is this team showed that a story about a lovelorn queer teenage girl, published in a YA book, can be relatable to anyone who’s ever had a bad relationship. . . . The narrative is framed around Freddy’s letters to an advice columnist and it’ll hit you right in the feels. It ends with a message that (no spoilers) everybody should hear.

This exploration of toxic relationships and social dynamics at the cusp of adulthood is, like its cast, sharp and dazzling.

By framing the dangers of normalizing toxic relationships within a wider context, Laura Dean Keeps Breaking Up With Me presents healthy, respectful connection not just as an act of self-preservation but as care for your friends and community, too, doubly so within marginalized groups.

In their first collaboration, Tamaki and Valero-O’Connell have developed a sophisticated storytelling dynamic . . . . fresh and exhilarating . . .

Tamaki explores the nuances of both romantic and platonic relationships with raw tenderness and honesty. Valero-O’Connell’s art is realistic and expressive, bringing the characters to life through dynamic grayscale illustrations featuring highlights of millennial pink...a triumphant queer coming-of-age story that will make your heart ache and soar.