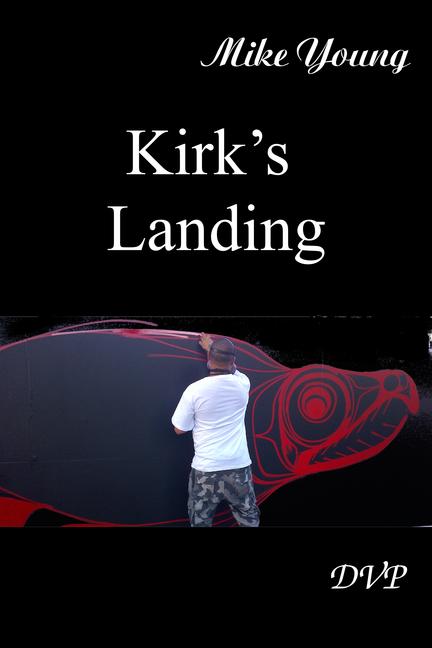 Dave, an undercover cop, is busted when his cloaking power fails in the middle of a biker gang meeting. Forced to hide out as detachment commander in Kirk's Landing, a small Manitoba town, his only goal is to continue as a loner and lay low for a year. He learns it's hard to stay a loner in a small town, though, especially with everyone eager to meet him and enlist his help with their version of the local issues. Dave finds his detective instincts pulling him into an unsolved disappearance, corruption in the local high tech paper mill, and pollution of the local lakes and rivers. When Dave tries to use his invisibility to help him in his investigations he discovers there are darker forces at work—forces that are now targeting him, changing him. It's now up to his friends to decide if he can be saved in time.

Mike was born and raised in Kirkland Lake, a small northern mining town with a nearby First Nations reserve.

He grew up with a love of the north, even in the midst of winter, exploring the surrounding woods with his friends, and his grandfather. He moved down south in his 20's to follow a career in quality management, but his real pleasure was still heading outside the city, with canoe and tent. While in Toronto he also developed an interest in back-alley murals, in artistic graffiti, and worked with some police there that saw its potential as a community building exercise. He'd always been a voracious reader, so several years into retirement he decided to try writing, and hasn't stopped since. This is his first book, but he has several more drafts waiting in the wings.

Dave slouched in his chair, surrounded by tattoos and testosterone. Only full patch members were left in the room—all the rest had been sent out. All except Dave, as once again he’d deliberately faded from their notice. He didn’t know exactly how he disappeared—whether peoples’ eyes just slid away from him or if light actually bent around him. His grandmother had never told him. All he knew was that it took a lot of concentration and he couldn’t fool cameras.

Dave quietly sipped his water. He was tired and needed to stay alert to focus his magical power, as today’s meeting was a key one. The gang would be discussing how they could expand their drug network, targeting new markets beyond the big cities. Dave tipped his chair back, scratched his full beard, and then, despite his good intentions, his thoughts wandered. He reviewed in his mind the number and location of firearms in the room. He then considered the number of members there with known or alleged murders on their scorecard. He’d joined up only a few weeks ago, with a referral from another chapter, but already it looked like his work would pay off well.

Sasquatch had taken back control last year when he’d been released from prison—with an MBA earned on taxpayers’ dollars. Badger was even newer than Dave, recently arrived from some First Nations group out in California. He’d already been made part of the inner circle, based on an impressive criminal record. They’d met earlier, and he’d given Dave a peculiar look at the time.

“Spider, phones off, and no photos,” said Sasquatch.

“Sorry boss.” Spider put down his cell phone. “Just thought you’d want to see us all together.” He stared at the picture, then pointed across the table at Dave. “Hey, what’s he still doing here?”

Dave woke up with a jolt, crashing back onto the floor, and definitely losing his concentration. With his sudden unfade everyone stared—frozen for a moment.

He knew that every person present would kill him without hesitation. He was on his own in this. He stood and spread his hands, smiling around the room. “Hey guys, lighten up! I just dozed off in my chair. What’s the big deal?” This was not going to work, judging from the angry looks he was getting—especially from the new guy. Badger gestured angrily at him, and Dave swayed with a wave of dizziness. His pause gave Sasquatch long enough to block the only door.

Dave glanced behind him at the large window, almost floor to ceiling, with rows of painted over panes. He grabbed a chair, swung as if to go after Badger but then turned and hit the window as hard as he could, shattering the old wood trim and glass. Good thing he had practised this in simulation exercises. Now was the time to see if his leather jacket was worth the price.

Mike Young’s lean, strong writing helps to propel this wide-ranging story quickly along. I read it in one sitting!!! — John Workman, Ottawa

Kirk's Landing has everything that a story needs — three-dimensional characters, diverse cultures and customs, and enough twists and turns to keep your head spinning. — Joyce Juzwik, Olive Branch, Mississippi

Truly a page turner! All the clues lead to mystery beneath a benign looking village for the reluctant hero. — Pat MacLeod, Ottawa, Ontario

Kirks’ Landing, the debut novel of Ottawa author Mike Young, launches the story of RCMP undercover officer Dave Browne whose cover is blown leading to his reassignment to a detachment in a small Manitoba town to get away from a vengeful drug gang in Toronto. Intending to spend a year staying out of trouble, Dave gets drawn into investigating a suspicious disappearance and grumblings about corruption and pollution linked to the paper mill, the town’s main employer. Dave also has to contend with the degradation of his special talent to fade from sight by a spirit that is making him increasingly violent.
The book offers plenty for the crime and mystery fans who like to follow police work and the solving of crimes. There’s also a strong current of First Nations’ spiritualism in the story. As well, the author captures the political tensions of a remote, one industry town, the politics behind a large government grant for the mill, and the uneasy relationship between First Nations and non-natives. There’s also a slow building romance between Dave and JB, who has returned to Kirks Landing after a failed attempt at university to try to find her missing father. Young concludes the novel with an unexpected twist for romance fans, which suggests we haven’t heard the last of Dave and JB.