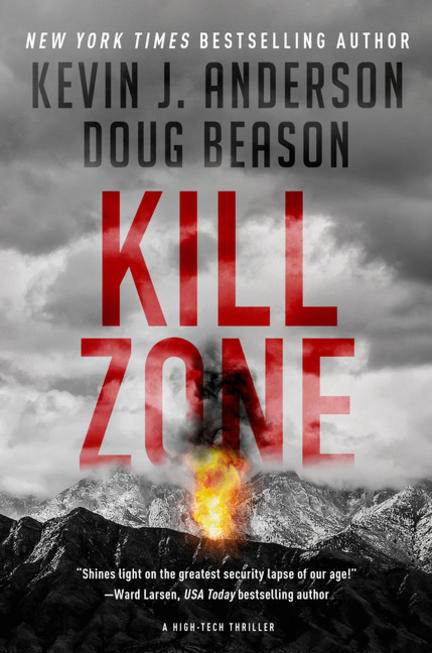 Power duo Kevin J. Anderson and Doug Beason team up inKill Zone, a perilous disaster thriller for the modern age.
Deep within a mountain in Albuquerque, New Mexico, a Cold War-era nuclear weapons storage facility is being used to covertly receive more than 100,000 tons of nuclear waste stored across the US. Only Department of Energy employee, Adonia, and a few others including a war hero, a senator, and an environmental activist, are allowed access to perform a high-level security review of the facilities. But Hydra Mountain was never meant to securely hold this much hazardous waste, and it has the potential to explode, taking with it all of Albuquerque and spreading radioactivity across the nation.
This disaster situation proves all too possible when a small plane crashes at a nearby military base, setting off Hydra’s lockdown and trapping Adonia and her team in the heart of the hazardous, waste-filled mountain. Now, the only direction for them to go is deeper into the mountain, through the tear gas and into a secretive area no one was ever supposed to know about.

KEVIN J. ANDERSON is the #1 international bestselling author of over 130 books, including the Young Jedi Knights series (co-written with his wife Rebecca Moesta), original Star Wars anthologies, numerous comics, over a dozen DUNE sequels (with Brian Herbert), and solo novels such asClimbing Olympus andResurrection, Inc. He has over 23 million copies in print in thirty languages, and more than 50 of his books have appeared on bestseller lists. He has won or been nominated for the Nebula Award, the Bram Stoker Award, the Shamus Award, the Colorado Book Award, the Scribe Award, the Faust Lifetime Achievement Award, the SFX Reader's Choice Award, andNew York TimesNotable Book. He has also completed all 500 miles of the Colorado Trail, and he has visited six of the seven continents. He and his wife have been married for more than twenty years; they live in a castle in the Rocky Mountains of Colorado.
DOUG BEASON, PhD is a Nebula Award finalist whose fiction has appeared in numerous magazines and anthologies includingThe Wall Street Journal andJournal of Computational Physics. A Fellow of the American Physical Society, Beason has worked on the White House staff for the President's Science Advisor under both the Bush and Clinton Administrations as the key staffer for space science and technology. As the Associate Laboratory Director for Threat Reduction at the Los Alamos National Laboratory, he was responsible for the programs and people that reduced the global threat of weapons of mass destruction. Before moving to Los Alamos, Doug received an M.S. in National Resource Strategy and completed a twenty-four year career as an Air Force officer, retiring as a Colonel. He has lived in Canada, the Philippine Islands, and Okinawa.