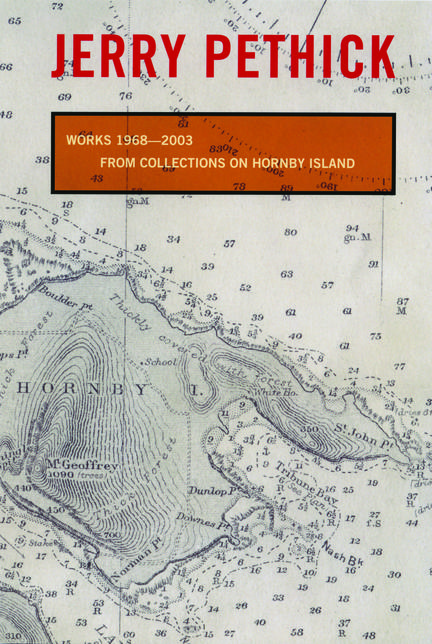 A summary of small works form Jerry Pethick's practice that remained in collections on Hornby Island, which was Pethick's home for the last thirty years of his life. His characteristic use of recycled materials is evident throughout as it is in his larger sculptures not in this exhibition.

Michael Turner was born in North Vancouver, B.C. in 1962 and spent his teenage summers working in the Skeena River salmon fishery. After high school, he travelled through Europe and North Africa, eventually to the University of Victoria, where he completed a BA (anthropology) in 1986. Between 1987–1993 he sang and played banjo in Hard Rock Miners; upon his retirement from touring, he opened the Malcolm Lowry Room (1993–1997). His first book, Company Town (1991), was nominated for a Dorothy Livesay Poetry Prize. His second book, Hard Core Logo, was adapted to feature-film. Kingsway (1995), American Whiskey Bar (1997), The Pornographer’s Poem (1999) and 8x10 (2009) followed. A frequent collaborator, he has written scripts with Stan Douglas, poems with Geoffrey Farmer and songs with cub, Dream Warriors, Fishbone and Kinnie Starr. He blogs at this address mtwebsit@blogspot.com.

Other titles by Michael Turner

The Authorized Biography of Art Bergmann

and other poems like Bird, Nine, x, and Eleven

Other titles by Geoffrey Farmer

The Surgeon and the Photographer

Other titles by Bill Jeffries

The Mouth and other storage facilities

Kafka in the Penal Colony