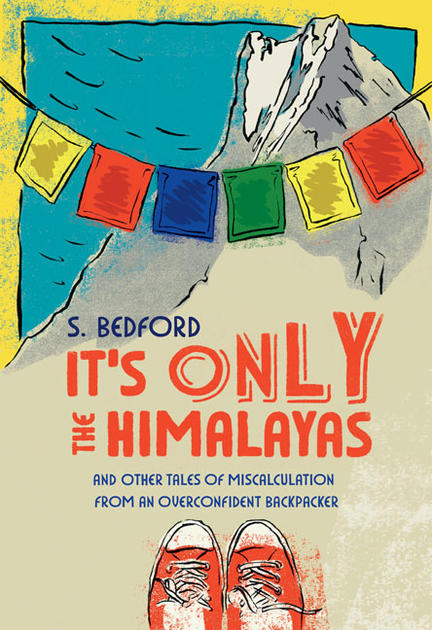 A laugh-out-loud travel memoir that reveals backpacking’s awkward side.

Sue, a disenchanted waitress, embarks upon a year-long quest around the world with her friend, Sara—who’s exasperatingly perfect. Expecting a whimsical jaunt of self-discovery, Sue instead encounters an absurd series of misadventures that render her embarrassed, terrified, and queasy (and in a lot of trouble with Philippine Airlines).

Whether she’s fleeing from ravenous lions, dancing amid smoking skulls, trekking Annapurna underprepared, or (accidentally) drugging an Englishman, Sue’s quick-witted, self-deprecating narrative might just inspire you to take your own chaotic adventure.

S. Bedford is an indie backpacker who has accidentally locked herself in the bathroom in over fifty countries. She calls Vancouver, Canada home base, and It’s Only the Himalayas is her first book.

“An honest, funny and fresh take about backpacking, which most of us who have hit the backpackers’ trail can relate to. Ideal for a light read for those long bus or train trips.” —Backpackers

The UK's World of Cruising magazine includes Bedford's memoir as one of six must pack travel reads.

Bedford shares her three most ridiculous moments while backpacking with The Poor Traveler blog.

Listen in as S. Bedford talks the importance of never giving up, how to get into writing and how to communicate across cultures with Tayo Rockson of As Told By Nomads.

Chapter 2 of It's Only the Himalayas, cleverly titled "Life is an Uphill Battle or Getting High with Dad," describes Bedford's trek to Annapurna Base Camp in Nepal, for which she was joined by her father. The pair celebrate Father's Day by reliving their adventure for All Lit Up.

The Expeditioner names It's Only the Himalayas one of Five New Travel Books to Take on Your Next Vacation.

Huffington Post Travel suggests you pack It's Only the Himalayas in your carryon this summer.

Online travel magazine Out of Town interviews Bedford about lessons she's learned on the road, which destinations are still on her bucket list, and her favourite experiences in the Philippines.

“S. Bedford brings a fresh voice to travel writing, one that is funny, observant, and original.” —Outpost

Check out La Carte magazine for an excerpt of Bedford's adventures in Africa.

“An entertaining look at those post-graduation backpacking trips so many of us have taken . . . Despite some moments that may alarm parents, this is a charming book that inspires the spirit of adventure and longing to travel no matter your age.” —y.a.m. magazine

"A hilarious travelogue for the social media generation. . ." -Publishers Weekly

The New York Times describes It's Only the Himalayas as the tale of "a Canadian waitress who swears like a fishwife goes on holiday to Boracay."

From Here to There: Melissa Kuipers, Sue Bedford, and Shekhar Paleja

A conversation about home and travel, genre—and almost getting killed by a stingray.