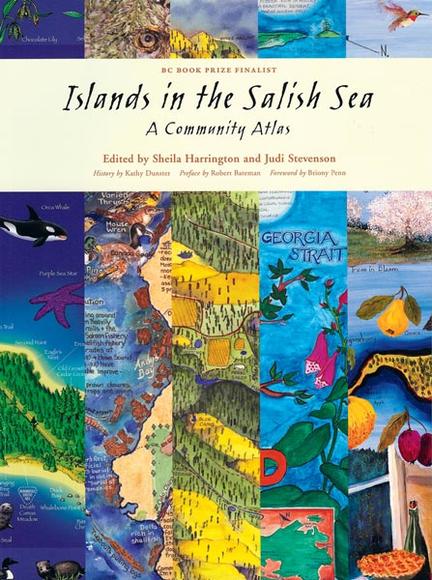 Gorgeous, fascinating and unconventional, the Islands in the Salish Sea show aspects of the Gulf Islands that are most beloved by the residents, from heritage orchards, fishing spots and patches of endangered wild orchids to ancient First Nations’ sites and bird colonies. The community on each island decided what elements should be depicted, and local artists then created each of the magnificent and wildly different maps. This volume is a treasure-trove of cherished information that could have been lost, presented with imagination and great beauty. The Islands in the Salish Sea Community Mapping Project was coordinated by Sheila Harrington and Judi Stevenson, who live on Salt Spring Island.

The project’s overall coordinators, Sheila Harrington and Judi Stevenson, live on Salt Spring Island. Sheila has edited and published several books and journals, including Giving The Land a Voice: Mapping Our Home Places, Environmental Destinations Vancouver Island and Positive Vibrations magazine (Volumes 1 through 12). She is currently the executive director of the Land Trust Alliance of British Columbia.

A Book About Nature's Gifts