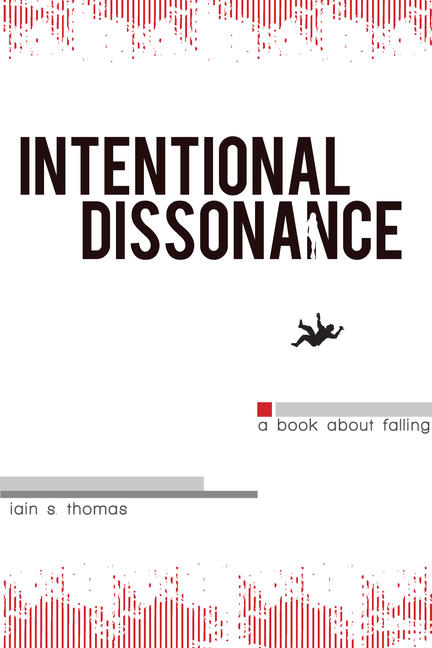 It’s been 10 years since the world officially ended. In the last city on Earth, Jon Salt is addicted to Sadness, a drug that invokes its name, and obsessed with his lover, Michelle; both of which threaten to drive him insane. Strange creatures and new technologies appeared in the last days of humanity and the widespread adoption of teleportation technology sundered the fabric of time and space, leaving a smattering of looping ghosts. It is a sad, monotone world, but the remaining populace is happy, thanks to the anti-depressants in the water supply.The last government on Earth has taken a special interest in a gift that Jon possesses: the ability to make his thoughts real. Jon must rely on that gift and the help of a few unlikely friends to stay one step ahead of those who desperately want to use him for something far more sinister than even he could dream…

Iain S. Thomas is a new media artist and author. As an author, his most famous work is I Wrote This For You, which he writes under the pseudonym ‘pleasefindthis’ - a blog then book that’s been on both the Amazon and iTunes bestseller lists since its launch in December 2011. As a writer for the design and new media industry, he’s won numerous local and international awards for his work. Amongst other things, he created a never-ending sentence for a monument for South Africa’s Jazz Artists and recently collaborated with musical phenomena BT on the packaging design for his last album. He wrote his first book, ‘Ignite’, at the age of 23 which won the Grand Prix at the First Paper House Art Of Design Awards and a gold individual craft award at the Loeries. He currently lives in Cape Town, South Africa.

It’s been nearly ten years since the world ended. Or it may as well have. Jon’s a man in the twilight of his twenties now and his delicate frame holds his clothes as best it can.Outside, across the road from him, a little blonde girl in a pink dress runs down the pavement outside into her father’s sweat-soaked arms. The father shoots wildly with a stolen pistol at the police teleporting in, who are yelling at him to stop. As she grips his neck with her tiny arms and holds tight, a single shot fired from a young sergeant hits the father in the shoulder, sending a spray of blood into the air, just missing his daughter’s head. His blue eyes go red and his face grimaces in pain, but still, he instinctively whips his body in front of her, his only daughter, and they fall backwards into the bright blue light behind them; a light coming from the stolen government teleporter the man, apparently, has illegally modified. And then silence for a second. Then a little blonde girl in a pink dress suddenly appears outside and runs down the pavement outside into her father’s arms, who’s shot in the shoulder, again. They have looped like this, for years. They’re just ghosts. The theory is that the man’s illegal modifications caused this infinite loop but no one really seems to know what causes the teleporters to loop, just that they do. And now humankind must deal with chronological waste sites, where teleporters have terminally jammed. It must watch the same thing, again and again.There are thousands of these waste sites and these ghosts are the reason that access to technology has been extremely limited. Jon stops watching. He’s been absent-mindedly playing with his father’s brass pocket watch, turning it over and over in his hands, feeling the engraving with his fingers: You will become whatever you want to become. He returns it to his inside jacket pocket, where it’s close to his heart. The view of this particular ghost, this endless loop of a quite famous bank robber trying to rescue or kidnap his daughter—depending on who you speak to or what newspaper you read; there are only two newspapers that are still published for the remaining populace, and they still disagree with each other—once drove the property prices sky-high amongst the last humans.But now, this place, like the little girl outside, is just another ghost.

"Definitely a unique book and one to read a couple of times over, even if you have read this before."~ The AfterImage"This book made me doubt my own sanity and the very existence of the universe as I know it. But raging madness is a small price to pay for this quick, enjoyable little read."~ Forever Young Adult"Intentional Dissonance brings about an emotional complexity to the genre that no other sci-fi story has ever brought to the table. There's almost a poetic ache while you read about scientists and technology through Jon's suffering and his inability to control his gifts."~ Critiques 4 Geeks

I Wrote This For You

Other titles by Iain S. Thomas

Poems & Stories of Connection and Otherwise