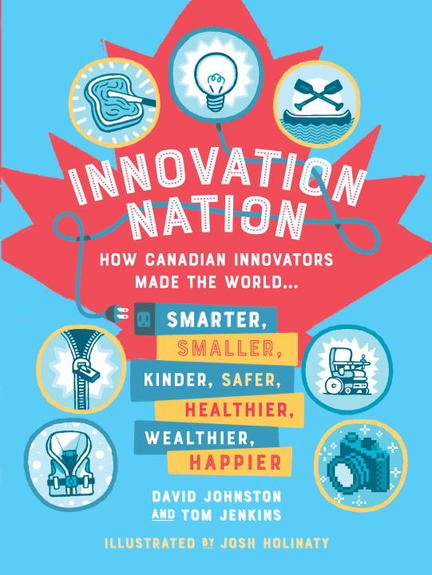 This young readers edition of Ingenious focuses on 50 kid-friendly Canadian innovations that changed the world, from canoes to whoopie cushions, chocolate bars to Pablum. Co-written by Canada's Governor General and accompanied by contemporary illustrations, this adaptation offers young Canadians a way to celebrate our history and world contributions on Canada's 150th birthday.

Successful innovation is always inspired by at least one of three forces -- insight, necessity and simple luck. Innovation Nation moves through history to explore what circumstances, incidents, coincidences and collaborations motivated each great Canadian idea, and what twist of fate then brought that idea into public acceptance.
From the marvels of aboriginal inventions such as the canoe, igloo and lifejacket to the latest pioneering advances in medicine, education, science, engineering and the arts, Canadians have improvised and worked together to make the world a better place. With striking, vibrant illustrations throughout, Innovation Nation is a gorgeous companion to the adult edition that will surprise, enlighten and entertain young readers, and will be a valuable resource for teachers and librarians.

One of Canada's most respected and beloved governors general, DAVID JOHNSTON is a graduate of Harvard, Cambridge and Queen's universities. He served as dean of law at Western University, principal of McGill University and president of the University of Waterloo. He is the author or co-author of twenty-five books, holds honorary doctorates from over twenty universities and is a Companion of the Order of Canada. Born in Sudbury, Ontario, he is married to Sharon Johnston, and has five daughters and twelve grandchildren.
TOM JENKINS is chairman of the board of OpenText and has served as a member of its board since 1994, as president and chief executive officer from 1994 to 2005 and as executive chairman and chief strategy officer from 2005 to 2013. He is the chancellor of the University of Waterloo and is an Officer of the Order of Canada (OC) for his contributions to education and innovation in Canada. He is a graduate of the Schulich School of Business at York University, the University of Toronto, and McMaster University. He is a Fellow of the Canadian Academy of Engineering (FCAE). Mr. Jenkins is a recipient of the Canadian Forces Decoration (CD) and the Queen's Diamond Jubilee Medal (QDJM).

JOSH HOLINATY was raised in Alberta and now works out of Toronto, Ontario. He has worked with a variety of clients, including the New York Times, the Globe and Mail, maisonneuve, MoneySense, on a variety of illustration projects, such as editorial, ads, poster design, walls and more. He has illustrated several children's books: Liam Takes a Stand by Troy Wilson, Ira Crumb Makes a Pretty Good Friend by Naseem Hrab, It's Catching by Jennifer Gardy and A Beginner's Guide to Immortality by Maria Birmingham (nominated for the 2016 Norma Fleck Award).

"3.5/4… this collection of ideas gives a fascinating look at Canada's contributions to the world and is a fitting tribute to its century and a half as a country… Co-authors Governor-General David Johnston and innovator/entrepreneur Tom Jenkins both bring extensive educational expertise to this volume, along with a desire to encourage young readers to embrace innovative activities and programs… Highly Recommended" --CM Magazine

"[R]eminds us just how ingenious Canadians are, despite our golly-gosh-shucks tendency to downplay our accomplishments… Bright illustrations by Josh Holinaty swirl around each page of text to evoke the brilliance of fun and curiosity." --Quill & Quire

Other titles by Tom Jenkins