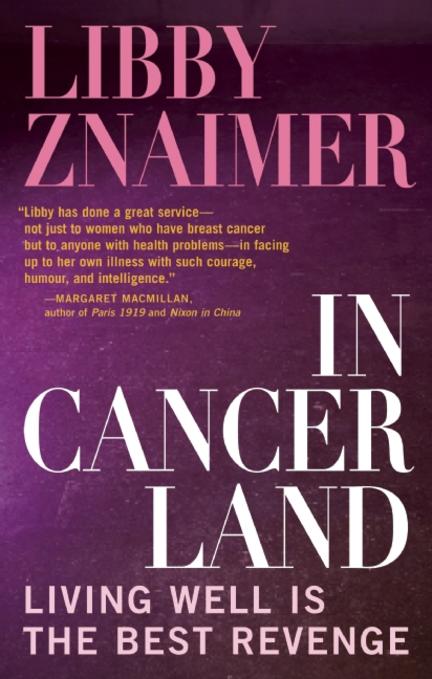 Prominent Canadian journalist, television broadcaster, and radio executive Libby Znaimer discovered a lump in her breast one hot summer's night. Three weeks later, she was diagnosed with breast cancer.
Candid, insightful, and immediate, written as it happened, In Cancerland shares Libby's real-time reaction to the diagnosis and her frustrations. It lays out the difficult choices she had to make. In a spirited narrative, Libby carries the reader along as she thinks through those decisions, sometimes second-guessing herself in the process. Her story offers a step-by-step example of how to navigate the medical system in the midst of a crisis. Libby also writes about the lighter side of living with cancer, like telling her friends and choosing a wig. Libby's column in the National Post on the topic of breast cancer drew responses from over 1200 readers.
There's not a sentimental word in the book. She does not believe that cancer is an epic battle outside the bounds of normal life. She sees it as part of life, and believes in living life fully with the disease. Her story is an example of how to embrace life while recovering from cancer.
Excerpt from the Chapter entitled, "Why I Hate the Word Survivor":
"I have early stage disease and a great prognosis. I can?t compare myself to someone whose disease has spread or recurred. If we?re all survivors, what does the word mean anywa”
Sometimes I?m almost annoyed when people compliment me on my attitude, and tell me `attitude is everything.` My disposition is great because my prognosis is. I can?t know how I?d react if things were grimmer. A good attitude certainly makes it easier to enjoy the time you have. But I find it hard to believe that patients with more advanced cancers could change their outcomes by being more upbeat.
The survivor label, the platitudes about attitude, and all the talk about cancer as a battle — it's all too politically correct for me. I cringe when I read about people who `lose` their battles with cancer. It sounds like it's their fault — like they may not have died if only they?d been tougher.
Sure, it helps to be mentally and physically strong when you?re diagnosed. But cancer is a disease, not an epic. Now that it is so widespread and mainstream, maybe it's time to put aside all the war-like imagery. I know so many people in the same situation that I don?t feel special, singled-out, or victimized. That's why I would hate being called a survivor. To me this feels random. If modern life has increased the incidence of cancer, consider this: 150 years ago, someone like me would likely have died of a childhood disease or in childbirth, long before reaching this point..."

LIBBY ZNAIMER broke into print journalism with The Associated Press in Tel Aviv covering peace talks, terrorist bombings, and the first Israeli incursion into Lebanon, then carved out an illustrious career in Canadian journalism, specializing in business, politics, and lifestyle issues. She contributes to numerous publications, and for the National Post she writes the ”Work Day“ column and a popular series on breast cancer entitled ”The Lump.“ She has worked for two decades in television broadcasting. After stints at Global Television, KSTP-TV in Minneapolis, and WNBC in New York, she covered Parliament Hill for three years, then moved into reporting and anchoring daily news coverage for ground-breaking television stations CityTV and CablePulse24. She is president for News at radio station Classical 96.3 FM.