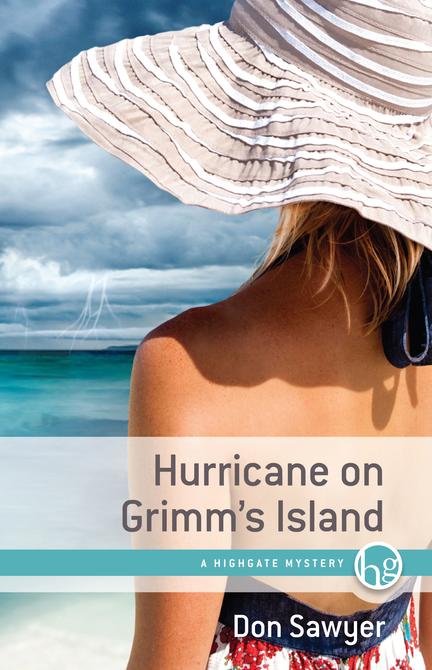 Stitch Robinson is a Toronto private eye. Disillusioned, all he wants from his vacation in the Bahamas is some peace and quiet. But first a monster hurricane batters his resort on Grimm's Island. Then the body of a beautiful socialite washes up on the beach. With power out and the island cut off, Stitch has to find the killer on his own. He's sick and tired of trailing cheating husbands. But does he have what it takes to find the murderer?

Don and Jan lived all over the United States and Canada before settling in Salmon Arm, British Columbia, in 1980. Melissa had shown up three years earlier and was immediately the cutest and smartest baby ever born. Farish came along in 1982. Melissa wasn't initially convinced that having a little sister would be fun, but eventually came around. Melissa now lives in New Orleans, where she is the Executive Director of the Youth Empowerment Project. Farish resides in Philadelphia, where she also works with inner-city kids. Both Jan and Don have sort of retired, but not really. Don writes books and articles and gives workshops. He still does development work in Africa. Jan is active in about a zillion volunteer groups and is a literacy consultant. When they find spare time, they enjoy travelling and visiting their daughters and sharing the girls' exciting lives.

The three of them stood and surveyed the jumble in front of them. “Did you bring your chainsaw down from Canada, Stitch?” George asked. “Looks like we’re going to need it.”“Sorry, George,” Stitch replied. “I couldn’t fit it into my checked baggage. And for some reason they wouldn’t let me carry it on.”George shook his head and smiled. “The airlines these days. They’re getting so fussy about security.” They turned as they heard a truck labouring up the long driveway from the main road.Molina was driving the Nissan pick-up. Morgan was in the passenger seat. Molina parked the truck and opened the door. She looked around and put her hands on her hips. “Bloody hell,” she said. “What a mess.” She walked over to the men and put her arms around George. “Thank God you’re safe.”“I’m not sure God had a lot to do with it,” Stitch said, gesturing at the destruction. “He did a pretty good job of hammering us.”Morgan came up behind Molina. “They say the power could be out for a week,” he said. “And telephone land lines are down.”“I’m not surprised,” George said. “What are the roads like? I can’t believe you managed to get in.”“Trees everywhere, George,” Molina said. “If it hadn’t have been for Morgan we wouldn’t have made it. It’s just a half a mile, but it took us more than an hour. Between the two of us we moved most of the bigger branches. And we were able to drive around or over the ones we couldn’t get out of the road.”Tomlin looked at Morgan. “Anyone hurt?”“Nah, Mr. Hepburn. Everyone at home is fine. I tried calling Manley Town on my cell. No good. But I sent my son down. Lots of roofs are gone. But they all knew it was coming. Everyone got inland to shelter.”Tomlin nodded. “That’s good. That’s very good.” Tomlin turned to George. “Cell phones are out. You think the relay towers were blown down?”George shook his head. “I doubt it. The towers are supposed to be able to handle 150-mile winds. But the power cables were probably snapped. Last hurricane we had they twisted around the tower like spaghetti. And who knows? Maybe the back-up generator isn’t working either. Wouldn’t be the first time.”“So there’s no communication to and from the island?” Stitch asked.“Not until we get the relay tower fixed. That could take weeks.”“There’s that satellite phone at the Island Health Centre, Mr. Campbell,” Morgan pointed out.Molina looked at Stitch. “I always thought a satellite phone was the same as a cell. Apparently they’re not.”George shook his head. “Completely different technology. Cells need land relays. They cover only certain areas. Satellite phones get transmissions directly from the satellites. They can cover the entire earth. Expensive as hell to make a call. But in an emergency, they can be a lifesaver.”George turned back to Morgan. “Right you are, Morgan. But the satellite phone is way up in Cat Harbour. That’s more than 15 miles away. If the road is as bad as you say, we’d have to walk to get there.” He looked up at the sky. “Besides, it’s no good until the clouds clear.”“In the meantime,” Tomlin broke in. “Perhaps I could cook us up a bit of breakfast? Maybe some of that lobster from last night in an omelette? With a pot of strong coffee. We need that most of all.”George smiled. “Spot on, Tomlin. But please, a spot of tea for me instead of that paint thinner you call coffee?”Tomlin grinned and headed for the lodge.George turned to Morgan. “Morgan, would you go down to the beach and have a look around? Check out what damage has been done. I have a feeling we are going to be doing alot of palm tree replanting.”Morgan nodded and headed down the stone footpath.“How about the rest of us getting the shutters down? It’s dark enough without those. And it is going to get real steamy inside without any air conditioning or fans. The breeze will be nice.”“That was some breeze we had last night,” Stitch commented.Molina nodded. “I checked our anemometer.”Stitch looked puzzled. “Anemometer?”“Sorry, Stitch,” Molina said. “An anemometer is a wind speed meter. Anyway, we clocked speeds of over 120 miles an hour.”“Category 3,” George mused. “With climate change, it’s only going to get worse.” Suddenly Morgan sprinted up the walkway.“Mr. Campbell!” he shouted. “Hurry! There’s a body washed up on the beach.”George looked at Stitch, and they both followed Morgan at a run. The surf was still angry, but it had receded well out from the shore. Logs, branches, plastic bottles and hanks of nylon rope littered the sand. To their left Morgan stood looking at a shape behind one of the logs. George and Stitch hurried over.A woman’s half-naked body lay face down. Her left arm was thrust into the sand under the log. Her right was stretched out toward the sea. Her legs were slightly bent and curled toward her chest, as if she were sleeping. As Stitch kneeled down, the ocean grumbled behind him. He picked up the woman’s right hand and pressed on her wrist. After a few seconds he lowered it back to the sand. Then he carefully slid his hand underneath the woman’s face and turned her head toward the log.He stood up and took a deep breath. “It’s Ellen,” he said quietly. “She’s dead.

I thoroughly enjoyed both books (Saving Farley's Bog and Hurricane on Grimm's Island). One night I stayed up to 2:30 in the morning, which is way past my bedtime, just to see who did it. They are both real page-turners! You are going to attract people with these who don't normally buy books, as well as appeal to young adults and adult learners. I can see why students scoop them up! Even though they are darned good detective stories with believable characters and situations, they manage to stay light. They are just plain fun to read. - Tom Wayman

Other titles by Don Sawyer

Where the Rivers Meet