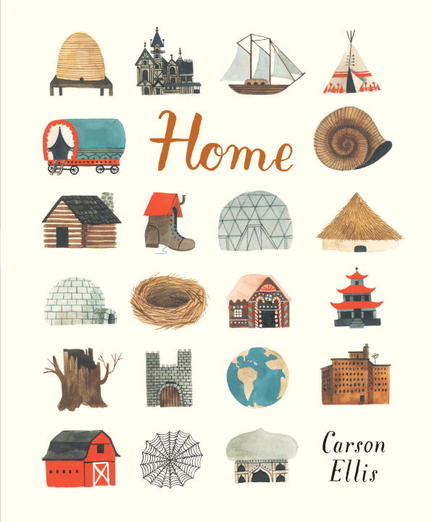 Influential artist Carson Ellis makes her solo picture-book debut with a whimsical tribute to the many possibilities of home.

Home might be a house in the country, an apartment in the city, or even a shoe. Home may be on the road or the sea, in the realm of myth, or in the artist’s own studio. A meditation on the concept of home and a visual treat that invites many return visits, this loving look at the places where people live marks the picture-book debut of Carson Ellis, acclaimed illustrator of the Wildwood series and artist for the indie band the Decemberists.

Carson Ellis previously illustrated The Composer Is Dead by Lemony Snicket and Dillweed's Revenge by Florence Parry Heide. She also collaborated with her husband, Colin Meloy, on the best-selling Wildwood series. Carson Ellis lives with her family outside Portland, Oregon.

Arrestingly illustrated... Ellis, in her picture-book debut, draws with simplicity and precision, yet there are often so many fanciful details that second and third looks will come naturally. ... The whole effect makes the pictures seem like frameable art.
—Booklist (starred review)

[Ellis'] sly humor and irreverent spirit only endear her to kids and grown-ups alike.
—The New York Times

A dreamy, painterly meditation on the diversity and range of dwellings around the world and across time and imagination. ... The text encourages the reader to participate (“But whose home is this? And what about this?”), and the cover illustration further extends the options of where we can live. All the choices are warmly inviting.
—The Horn Book

A simple yet deep look at homes... This is a great vocabulary builder as you talk about all the homes — what makes them the same and what makes them different.
—Chicago Tribune

A stunner.
—The Wall Street Journal

Enchanting and accessible, "Home" is an instant classic for the K-3 set and a thoughtful Northwest-grown gift.
—Seattle Times

In her beautiful and inviting solo debut, Home, Carson Ellis (Wildwood series artist) illustrates the many different kinds of homes that humans and animals—past, present and even fictional—might inhabit.
—Shelf Awareness

Other titles by Carson Ellis

Notes from a Children's Librarian: On Structures

Great fiction and nonfiction titles to launch the Grade 3 science unit on structures and buildings.