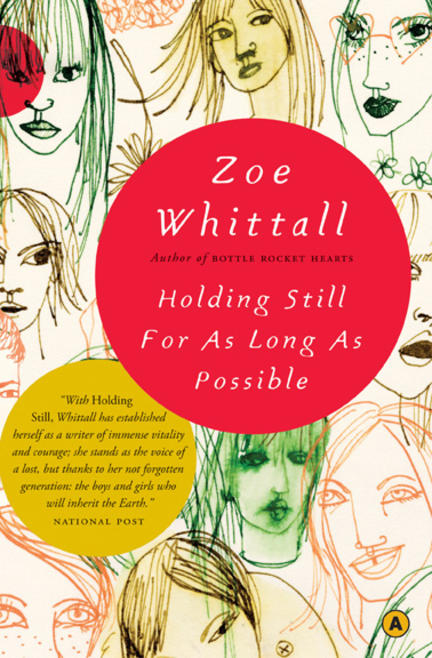 What is it like to grow into adulthood with the war on terror as your defining political memory, with SARS and Hurricane Katrina as your backdrop? In this robust, elegantly plotted, and ultimately life-affirming novel, Zoe Whittall presents a dazzling portrait of a generation we've rarely seen in literature -- the twenty-five-year olds who grew up on anti-anxiety meds, text-messaging each other truncated emotional reactions, unsure of what's public and what's private.

Zoe Whittall fulfills the promise of her acclaimed first novel, Bottle Rocket Hearts, with this extraordinary novel set in Toronto's seedy-but-gentrifying Parkdale. Revolving around three interlocking lives, it offers, among other things, a detailed inside look at the work of paramedics, and entertaining celebrity gossip.

ZOE WHITTALL’s third novel, The Best Kind of People is currently being adapted for limited series by director Sarah Polley. It was shortlisted for the Scotiabank Giller Prize, named Indigo’s #1 Book of 2016, a Heather’s Pick and a Best Book of the Year by the Walrus, the Globe and Mail, Toronto Life and the National Post. Her second novel, Holding Still for as Long as Possible, won a Lambda Literary Award for trans fiction and was an American Library Association Stonewall Honor Book. Her debut novel, Bottle Rocket Hearts, won the Dayne Ogilvie Prize and is being adapted for screen. In 2014 Whittall sold her first sitcom, Breaking, to CTV, and recently optioned the half-hour comedy Wellville to CBC. She has worked as a TV writer on the Emmy Award–winning comedy Schitt’s Creek and the Baroness Von Sketch Show, for which she won a 2018 Canadian Screen Award. She has written three volumes of poetry, most recently an anniversary reissue of The Emily Valentine Poems, about which Eileen Myles said, “I would like to know everything about this person.” Zoe Whittall was born on a sheep farm in the Eastern Townships of Quebec, has an MFA from the University of Guelph and has called Toronto home since 1997.

Holding Still For As Long As Possible is a foul-mouthed, hard-drinking, casual-sexing book. At its heart, though, Whittall’s brilliantly simple novel is a good old-fashioned love story, charming and compelling. And it feels true.

...the talented young author strips away the technological facade and reveals what really goes on in the lives and minds of some of today's young adults...it's her gift for capturing the various anxieties and fears of this generation that leaves a lasting impression.

Holding Still for as Long as Possible is part of an exciting new wave of books highlighting trans characters without making their gender the book's primary focus . . . well-developed . . .

Holding Still holds an astonishingly astute mirror to a generation still struggling to define itself. A fine sophomore novel by one of Canada's most promising young writers.

With Holding Still, Whittall has established herself as a writer of immense vitality and courage; she stands as the voice of a lost, but thanks to her not forgotten generation: the boys and girls who will inherit the Earth.

Whittall's writing has a tremendous amount of youthful energy...This is a real Toronto story, set against SARS and fears about terrorism.

In Holding Still for as Long as Possible, the awareness of mortality intersects with the romantic restlessness of youth. It makes for a story whose vital signs are fully present and robust.

...Whittall is a writer of richly nuanced characters. There's not a flubbed note in any of the voices. Whittall has still made a grand entertainment out of everyday collisions.

All three characters are well crafted: at once unique, yet easily recognizable...Whittall never shies away from displaying their flaws or their problems...

...Whittall has an astounding command of language.

Like a seasoned paramedic of the soul Whittall cares for the vitality of her reader in an incompareably fearless fashion.

Whittall's writing is vibrant, funny, and smart. She uses the power of the pop culture reference responsibly; rather than inundate, she picks her spots with effective mentions from a delectably oddball arsenal that ranges from Waydowntown to Designing Women...this novel firmly pigeonholes her as a kick-ass writer.

An unforgettable depiction of growing up in the new millennium.

...a story that really speaks to the generation while offering some sage advice about living & there are moments of genuine, understated authenticity, especially in Whittall's depiction of complex human dynamics.

...Whittall is a dexterous puppeteer, and the book is unputdownable.

Breathless, jolting and sputtering with vitality, Holding Still For As Long As Possible explores the inevitable expiry date on lives and relationships, and our white-knuckle struggle to hang on to both.

Great read for a specific time in life

While I enjoyed this book, I feel like I might have enjoyed it a lot more had I read it about five years ago; and I would be hesitant to recommend it to anyone who is not in their early twenties. It captures so perfectly the feelings of those years, at least for a specific set of twenty-somethings: the drama, the sexual exploration, the sometimes self-imposed poverty, the longing to connect to something bigger than oneself.

The characters in Whittall's novel live in the neighbourhoods my friends and I live in; the downtown Toronto neighbourhoods that consist of gorgeous old buildings divided into apartments, secret gems in areas that are rapidly turning into condo forests. Gentrification is an ever-present background character in this story.

The story itself is more like a bunch of stuff that happens in the lives of some people. It's interesting and engaging, but not totally traditionally story-shaped. People get together, break up, hang out, think about going to class or work or back home to visit their parents. All the characters seem to have a very fluid sexuality, which is really cool; gender identity does not appear to be a barrier to any of their relationships. They communicate through text messages and hang out at odd hours of the night. They probably don't think that they are hipsters. Every one of them seems like someone I know.

What I really liked was how Whittall dealt with her trans character; it came up at the beginning that he was trans, and then it was not mentioned again. He had a regular life like every other character. This is positive representation: when it's not such a big fucking deal. I liked it very, very much.

The city was used well as a backdrop to the story, and I always really like reading scenes set in places that I know.

I did like the book a lot; I just found it hard to get emotionally invested in characters with problems that I already probably spent too much time and energy on in my own life just a few years ago. I do highly recommend it for people in the 19-24 age range, especially those looking to read about non-hetero people who have regular person problems and aren't tokens or designated sidekicks.

Other titles by Zoe Whittall

The Best Kind of People

Books to help find your way around a new city