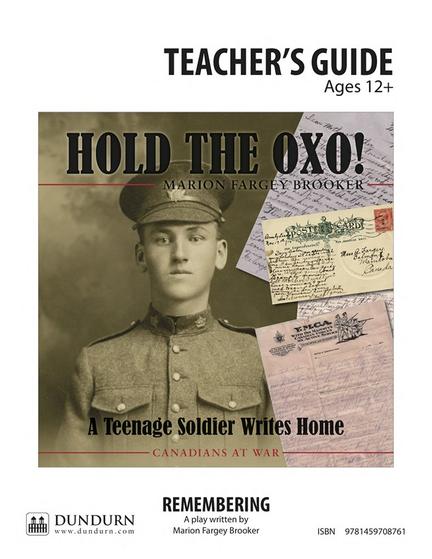 The Teacher’s Guide to accompany Hold the Oxo! by Marion Fargery Brooker.
Short-listed for the 2014 Forest of Reading - White Pine Award for Non-Fiction
Canada was young during the First World War, and with as many as 20,000 underage soldiers leaving their homes to join the war effort, the country’s army was, too. Jim, at 17, was one of them, and he penned countless letters home. But these weren’t the writings of an ordinary boy. They were the letters of a lad who left a small farming community for the city on July 15, 1915, a boy who volunteered to serve with the 79th Queen’s Own Cameron Highlanders.
Jim’s letters home gloss over the horrors of war, focusing instead on issues of the home front: of harvesting, training the horses, and the price of hogs. Rarely do these letters, especially those to his mother and father, mention the mud and rats, the lice and stench of the trenches, or the night duty of cutting barbed wire in no man’s land. For 95 years his letters remained in a shoebox decorated by his mother.
Jim was just 18 when he was wounded and died during the Battle of the Somme. Hold the Oxo! tells the story that lies between the lines of his letters, filling in the historical context and helping us to understand what it was like to be Jim.

Marion Fargey Brooker has spent many years writing dramas, historical, and human interest stories for educational radio for Grades 1-12. She is the author of Thin Ice and Noreen and the Amazing No-Good Horse. She lives in Edmonton.

...gives an accurate and meaningful account of war. As a result, one can't help but sympathize with the young men who volunteered to fight in a war the didn't really comprehend and for the many, like Jim, who never came home...(the) writing is clear and easy to understand and perfect for the intended readership.

Hold the Oxo! very clearly demonstrates what war in the trenches means and how so many nations were stripped of their youth before they had an opportunity to truly comprehend their place in greater society.

Other titles by Marion Fargey Brooker