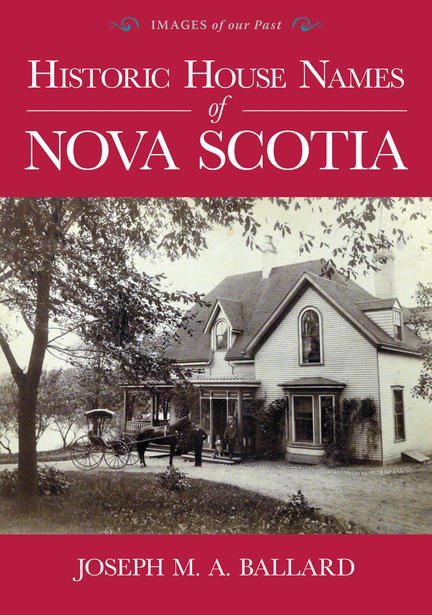 Mount Uniacke, Acacia Grove, Winckworth, Saint's Rest, Spruce Tree Cottage. Ever wonder how Nova Scotia houses got their names? The better-known names are largely connected with prominent historical figures who resided in commodious homes with sprawling grounds, but the naming tradition was far more prevalent than that. In this book, the author explains that a "hurst" is a wooded eminence, a hillock, or a grove, and this suffix lends an air of nobility to a property—Springhurst in Maitland, Lindenhurst in Halifax, and the ubiquitous Elmhurst, which appears in various communities.

Named houses have a certain essence and vitality about them. Named or not, places do possess character—and putting a name to something that exhibits character makes sense on some level. Historic House Names of Nova Scotia provides a fascinating look at the house-naming tradition in Nova Scotia. What sorts of names did Bluenoses create, and what did the names mean? Author and historian Joe Ballard has amassed a wealth of historical information and photos on the subject.

Joseph M. A. Ballard and his wife, Melanie, reside on an old farm they call Gooseberry Cottage just outside Truro, Nova Scotia. Ballard is a member of numerous heritage associations, and his articles on heritage preservation have appeared in Saltscapes and Edifice. Ballard received the 2012 Town of Truro Heritage Award and the 2016 Helen Creighton Folklore Society research grant.

Other titles by Joseph M.A. Ballard