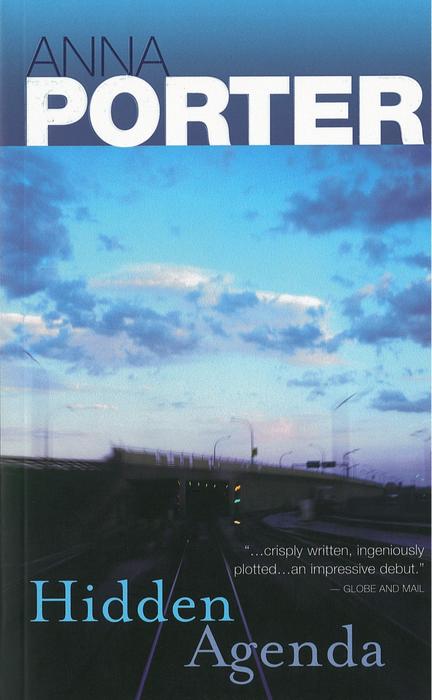 Would a man about to kill himself make a dental appointment? Judith Hayes, a freelance journalist, doesn't thin so. She was the last person to see George Harris alive before he left his Toronto publishing company and stepped--or was it pushed--in front of a speeding subway train.

The police called his death a suicide. Judith thinks it's murder. Gutsy and good-looking, Judith Hayes once worked for the handsome Harris. She knows his company is in the red, with millions owed to the bank. But when she'd interviewed him that afternoon for a magazine feature, he hadn't talked like a man planning his own death. He'd talked like a high-powered businessman with a breakthrough deal in the works and big dreams about to come true. But had one of those dreams turned into the nightmare that had gotten him killed?

Anna Porter was born in Budapest, Hungary, during the Second World War and escaped with her mother at the end of the 1956 revolution to New Zealand, where she graduated with an MA from Christchurch University. Like so many young Kiwis, after graduation she travelled to London, England, where she had her first taste of publishing. In 1968, she arrived in Canada, and was soon swept up in the cultural explosion of the 1970s. At McClelland & Stewart, run by the flamboyant Jack McClelland, she quickly found herself at the heart of Canadian publishing. In 1982, she founded Key Porter Books and published such national figures as Farley Mowat, Jean Chrétien, Conrad Black, and Allan Fotheringham. She went on to write both fiction and nonfiction works, including Kasztner’s Train, which won the Writers’ Trust Nonfiction Prize and the Jewish Book Award, The Ghosts of Europe, which won the Shaughnessey Cohen Prize for Political Writing, and has published four mystery novels. She is an Officer of the Order of Canada and a recipient of the Order of Ontario. She lives in Toronto with her husband, Julian Porter. Visit her at AnnaPorter.ca.

“Lively … mysterious deaths and plenty of insider publishing stuff along the way.”

Other titles by Anna Porter

Journeys through Central Europe's Troubled Past and Uncertain Future

The True Story of Rezso Kasztner, Unknown Hero of the Holocaust