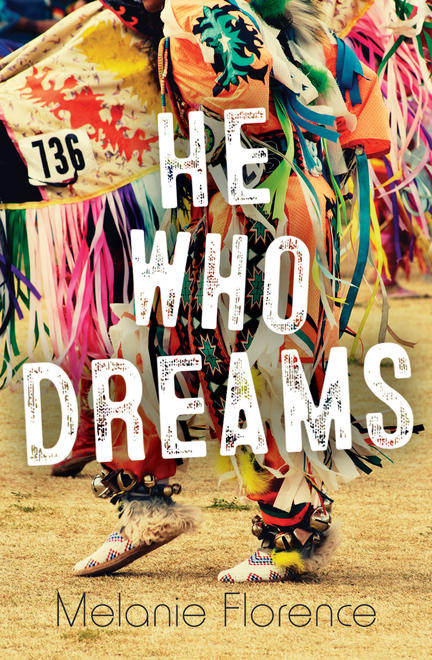 Juggling soccer, school, friends and family leaves John with little time for anything else. But one day at the local community center, following the sound of drums, he stumbles into an Indigenous dance class. Before he knows what's happening, John finds himself stumbling through beginner classes with a bunch of little girls, skipping soccer practice and letting his other responsibilities slide. When he attends a pow wow and witnesses a powerful performance, he realizes that he wants to be a dancer more than anything. But the nearest class for boys is at the Native Cultural Center in the city, and he still hasn't told his family or friends about his new passion. If he wants to dance, he will have to stop hiding. Between the mocking of his teammates and the hostility of the boys in his dance class, John must find a way to balance and embrace both the Irish and Cree sides of his heritage.

MELANIE FLORENCE is an award-winning writer of Cree and Scottish heritage based in Toronto, Ontario. She is the author of Missing Nimâmâ, which won the 2016 TD Canadian Children’s Literature Award, the 2017 Forest of Reading Golden Oak Award and was a finalist for the 2017 First Nation Communities READ award. Her most recent picture book, Stolen Words, won the Ruth and Sylvia Schwartz Children’s Book Award and was a finalist for the Marilyn Baillie Picture Book Award. Her other books include Righting Canada’s Wrongs: Residential Schools and the teen novels Just Lucky, He Who Dreams, The Missing, One Night, and Rez Runaway. Visit her at https://www.melanieflorence.com/.

"The author...reinforces that she is capable of writing engaging stories about Indigenous subjects in any genre...John is an appealing character...Scenes between him and his parents and energetic younger sister, Jen, are especially well drawn...He Who Dreams offers readers a fast-paced story with realistic Indigenous content connecting the book to contemporary discussions about Indigenous issues in Canada."

"Florence effortlessly creates a very real and loving biracial family for her thoroughly modern protagonist. John's fast-paced tale twines universal teen concerns with specific cultural issues. This novel allows young readers to embrace their own heritages and realize they stand on the shoulders of all their ancestors."

"He Who Dreams is a breathtaking read for anyone who enjoys dance, drumming, pow wows, and traditional aboriginal attire. Enjoy!"

"Through realistic dialogue and concise, yet entertaining, chapters, He Who Dreams takes readers from a soccer field to the Grand Entry of a powwow with ease…Powerful and smart, He Who Dreams brims with valuable lessons, allowing young readers to access important issues in a highly engaging way. "

"Melanie Florence manages...to portray a realistic portrait of a young man trying to figure out what motivates him and where he wants to go while giving his story room to tell itself rather than trying to direct from the keyboard. Well done."

Other titles by Melanie Florence

Indigenous Childrens and YA Books From BC