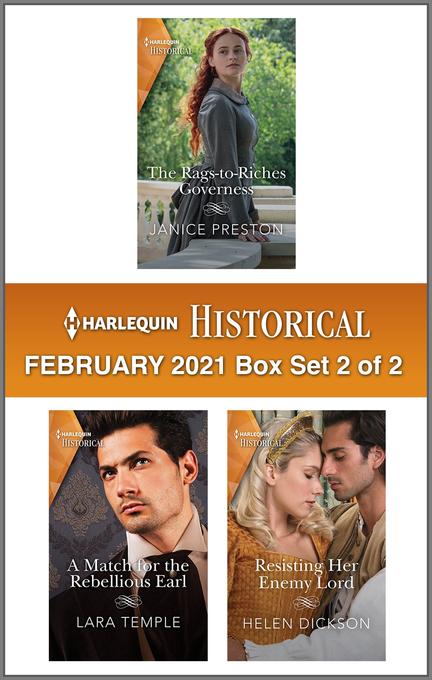 Do you dream of wicked rakes, gorgeous Highlanders and muscled Viking warriors? Harlequin® Historical brings you three new full-length titles in one collection!

In order to claim an unexpected inheritance, governess Leah must marry. Her employer, the enigmatic Earl who’s captured her heart, offers a marriage of convenience.  Can Leah marry him without love?

Genevieve needs dashing Captain Kit Carrington’s help, but is convinced he’ll refuse the family that once rejected him. Until one waltz reveals that he’s not her enemy, but a very tempting ally…

Widowed Catherine Stratton defended her husband’s castle for years. Now she must reluctantly travel with his cousin – and enemy – John. What she didn’t expect? The heat simmering between them!

Janice Preston grew up in Wembley. At eighteen she moved to Devon, where she met and married a farmer, but she now lives in the West Midlands with her second husband and two cats. She has two children and two step-children, all now adults. Apart from farming, Janice has worked as a conveyancer, a police call handler and a university administrator. She currently works part-time for a weight management counsellor (vainly trying to control her own weight despite her love of chocolate!).

Lara Temple's life has been about changes - she has lived on three continents and gone from the military to Wall Street to wife, mom, and philosophy student. But with one constant - ever since she can remember she has been writing stories. In 2014 she took the plunge and sent a manuscript to Harlequin's SYTYCW contest which has come out (March 2016) as  "Lord Crayle's Secret World" and her second novel "The Reluctant Viscount" is due this summer.

Helen Dickson lives in South Yorkshire with her retired farm manager husband. On leaving school she entered the nursing profession, which she left to bring up a young family. Having moved out of the chaotic farmhouse, she has more time to indulge in her favourite pastimes. She enjoys being outdoors, travelling, reading and music. An incurable romantic, she writes for pleasure. It was a love of history that drove her to writing historical romantic fiction.

Other titles by Janice Preston

Other titles by Lara Temple

A Match for the Rebellious Earl

Other titles by Helen Dickson