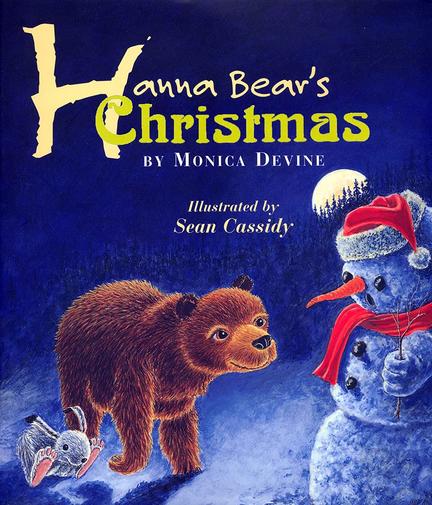 Hanna Bear can smell winter coming. It's time to find a den and snooze through the cold days and nights until spring because that is what bears do. But this year Hanna longs to see Christmas, so her friends agree to get her up for the special day. It isn't that easy to wake up a sleeping bear. When the mountain goat butts the door of her den, Hanna doesn't stir. So the moose tries, but even the sound of his antlers scraping back and forth doesn't wake up Hanna. The spruce grouse tries, and then the snowshoe hare, but no one can make enough noise.

What are they going to do? They don't want to disappoint Hanna. But each one has made as much noise as they can. What more can they do?

Children will enjoy making their own brand of noise as they follow along with the animals and help wake up Hanna. And they'll revel in the magic of a Christmas night, as they follow Hanna and her friends through the woods. A fun story for little ones about when to cooperate, when to make noise, and when to be silent.

Monica Devine writes both fiction and non-fiction for children and adults, and she is a past nominee for the Golden Kite Award for outstanding work in children's non-fiction. Her titles include Carry Me, Mama, and Iditarod: The Greatest Win Ever. Monica lives in Eagle River, Alaska.

"There is a significant subgenre of Christmas books revolving around a hibernating animal that can't or won't wake up for the festivities. This is a pleasant, if slight, addition to that body of literature. . . The lively, textured illustrations add an element of humor that is not obvious in the text alone."
— School Library Journal

"Cassidy's illustrations are very colorful and expressive and are as important to the book as Devine's text which is sure to delight readers in this age group with its characters and the sound effects of the animals' trying to wake up Hanna Bear. Hanna Bear's Christmas is truly refreshing with its story celebrating some of the joys of the season, which may be less obvious in our busy world."
Highly recommended
— CM Magazine

"Children of all ages will love this magical Christmas story."
— In The Hills Magazine

Hanna wants to see Christmas, so her friends agree to wake her for the special day. They discover that it isn’t easy rousing their bear friend from her slumber. Charming artwork accompanies this tale about cooperation.

Other titles by Monica Devine