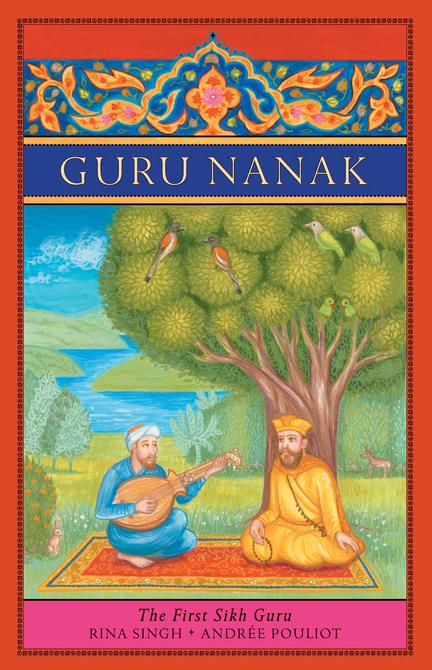 The Sikh faith, the world’s fifth largest religion, began with the teachings of Guru Nanak in the fifteenth century and evolved with the nine gurus who followed him. Their writings as well as those of Hindu and Muslim mystics are collected in the Sikh holy book, the Guru Granth Sahib.

Guru Nanak tells the story of the first guru of the Sikhs, who was born in 1469 in India at a time when there were great tensions between Hindus and Muslims. Born into a humble Hindu family, Nanak was an extraordinary child who from a very young age questioned the rituals of religion and the ways of the world around him. He grew up to be a great spiritual teacher, revolutionary for his times, declaring that there was no difference between Hindus and Muslims, that men and women were equal and that caste was irrelevant. His attempt to define a universal humanity resulted in Sikhism -- a religion that embraces everyone.

This biography, exquisitely illustrated in the Indian miniature-painting tradition, tells the story of his life, including his spiritual journeys, the miracles he performed to illustrate his teachings, and his poetry.

Rina Singh has published several critically acclaimed books for children inspired by her Indian Canadian heritage, including Diwali Lights, Holi Colors and Diwali: A Festival of Lights, which was nominated for the Red Cedar Award. Rina’s own grandmother never got the chance to go to school. Grandmother School is dedicated to her memory. Rina lives in Toronto with her family.

Andrée Pouliot is a visual artist who has exhibited her paintings in Canada, the US, the UK and India. She is also the founder and creative director of Soma Blockprints, an Indian export company specializing in woodblock printed fabrics. She is passionate about India and has studied Indian classical dance, mythology, textile arts, miniature painting and Hinduism. She lived in Delhi for many years, and now divides her time between Jaipur and Ottawa.

Nanak is one of the great spiritual teachers of our times. This biography gives us insight into his active, influential life.

Guru Nanak: The First Sikh Guru is a simply and naturally written book. It is also an elegantly produced book that you will treasure.

...an attractive introduction to the peaceable origins of an important religion.

Guru Nanak founded the Sikh faith in India more than 500 years ago. This biography, illustrated in the Indian miniature-painting tradition, tells the story of his life — his spiritual journey, the miracles he performed to illustrate his teachings, and his poetry. Also included is a map showing Guru Nanak’s travels, a brief history of the gurus who followed him, a glossary and suggestions for further reading.

Other titles by Rina Singh

How One Village Celebrates the Birth of Every Girl