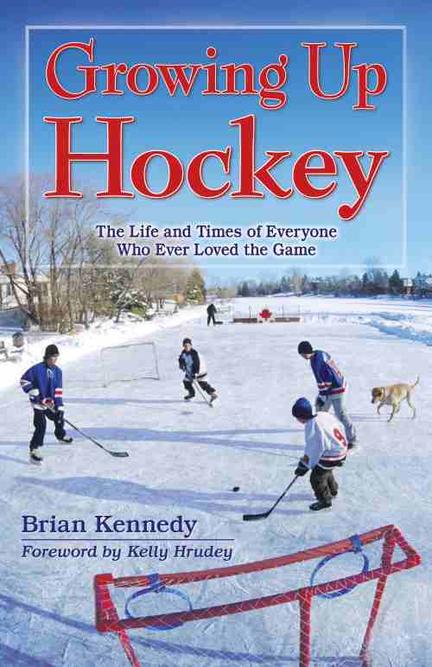 If only an honest book can live, as Emerson said, then Growing Up Hockey is immortal. It's the story of everyone who plays or cares about the game. It's warm reading for a cold night. Or any night. Jack Falla Author of Home Ice Many of us grew up scoring a thousand glorious NHL goals in our minds, and on our streets and corner rinks. We won the Stanley Cup over and over in our imaginations. What happened to those childhood heroics? We packed them in a box with our hockey cards and forgot them. Growing Up Hockey uses the heartwarming and comical exploits of a house-league third-liner to prompt us to re-live our memories of hockey glory. It shows that for those who love it, the game is never far away. Bobby Hull, Frank Mahovlich, Wayne Gretzky they're all here. But equally large are the neighbourhood rink bullies, the Pee Wee league super-starts and the obsessed NHL aficionados. Together, they create a hockey myth as grand as ever existed and as unique as each of us.

Brian Kennedy has an MA in Canadian Studies. Currently, he teaches Drama and English, a career which he has enjoyed for close to thirty years. His students led him to learn more about the history of Canadian theatre. When heâ??s not teaching, Brian tries to improve his hockey skills. This task may take another lifetime.

KELLY HRUDEY was born and raised in Edmonton, Alberta. The former Medicine Hat Tiger and Indianapolis Checker played for fifteen seasons in the NHL with the New York Islanders, Los Angeles Kings and San Jose Sharks. Hrudey is now a well-respected hockey colour analyst for the Calgary Flames and a broadcaster for Hockey Night in Canada. He and his wife, Donna, and their daughters, Jessica, Megan and Kaitlin, all live in Calgary.

KIRSTIE McLELLAN DAY ranks among the top hockey writers in the world thanks to six national bestsellers (including three instant #1 bestsellers): Theo Fleury’s Playing with Fire, Bob Probert’s Tough Guy, Ron MacLean’s Cornered and Hockey Towns, Wayne Gretzky’s 99: Stories of the Game, and Kelly Hrudey’s Calling the Shots. Kirstie is a mother of five and is married to Pyramid Productions Inc. president and television producer Larry Day. They live in Calgary.

Other titles by Brian Kennedy

Coming Down the Mountain

My Country is Hockey

How Hockey Explains Canadian Culture, History, Politics, Heroes, French-English Rivalry and Who We Are as Canadians

Scenes from Canadian Plays Since 1990

How to Speak Hockey

Baron Bold and the Beauteous Maid

A Compact History of Canadian Theatre

Two for the Show

Other titles by Kelly Hrudey

Ups, Downs and Rebounds – My Life in the Great Game of Hockey

The Man They Call Mr. Goalie