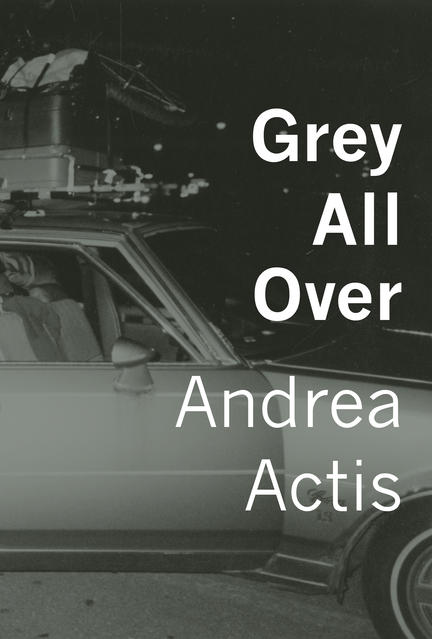 “Please stay with me, please stay here, please cause poltergeists in my stupid apartment…”

Late in the evening of December 13, 2007, Andrea Actis found her father, Jeff, facedown dead in her East Vancouver apartment. So began her passage through grief, self-reckoning, and graduate school in Providence, Rhode Island, where the poetics she studied (and sometimes repudiated) became integral to her gradual reconstruction of wholeness. An assemblage of “evidence” recovered from emails about paranormal encounters sent and received by Jeff (greyallover@yahoo.com), junk mail from false prophets, an annotated excerpt from Laura (Riding) Jackson’s “The Serious Angels: A True Story,” and transcripts of Actis’ dreams, conversations, and messages to the dead, Grey All Over not only celebrates a rare, close, complicated father-daughter bond, it also boldly expands the empathetic and critical capacities of poetry itself. In pulling us outside the comfort zones of received aesthetics and social norms, Actis asks us to embrace with whole seriousness “the pragmatics of intuition” in all the ways we read, live, and love.

“When a loved one dies, there’s all this stuff to deal with, and in the midst of grief we begin to collect, sort, document, store, and discard. Andrea Actis has taken the stuff surrounding her father’s death and created a book that is, like grief, in turns heartbreaking, wise, chaotic, drunk, wry, and always unflinchingly honest. This powerful testament of survival is for anyone who has felt the ‘déjà vu in reverse’ of grief. It is for the living.” —Sachiko Murakami, author of Render

“Love letter, experimental poem, meditation, conversation with the dead—Andrea Actis’s compelling debut is unlike any memoir I’ve ever read. In one passage, Actis digs out the biggest piece of bone she can find in the vessel of her father’s ashes and gently bites on it. Reading Grey All Over I had a similar sensation. Ash. Bone. Love.” —Jen Currin, author of Hider/Seeker

“This absolutely beautiful work makes plain that seriousness feels like love.” —Aisha Sasha John, author of I have to live.

grew up in Toronto but for most of her life has lived in Vancouver on the occupied, ancestral territories of the Musqueam, Squamish, and Tsleil-Waututh Nations. She teaches writing and literature at Capilano University and from 2015 to 2017 edited The Capilano Review. Grey All Over is her first book. Her second book, Our Kind of Seriousness, will come out eventually.

Excerpt: Grey All Over (by (author) Andrea Actis)

So the date is December 14th, 2008. It’s, uh, Sunday night. I’m in my relatively new home in Providence, Rhode Island, doing my…well just about completing my first semester of a five-year PhD program in English and I’m surrounded by books and notes and once again I’m getting away with writing on Simone de Beauvoir and The Ethics of Ambiguity and failure somehow.

Um, I’m gonna try to talk to the camera like it’s you. You bought me this thing with Mom before I went to Panama, two Januaries ago I guess. I don’t use the camera as much as I should but I figured this would be a good opportunity. There’s that video you took of me when I was getting packed to go on that trip and I recently found the video and there’s like a really sad Sigur Ros song playing in the background and I remember that night so clearly…hanging out in the bedroom you’d eventually die in. Oh god, then all the black mould that developed when Tiz and Julian moved in…anyway. So it’s kind of like, yeah, it’s like this is your…I’m now pretending this is you.

Um…these are your ashes! In the container you used to keep your weed in. I think you got this thing at a garage sale in Rexdale when I was little…where that guy tried to sell you his bookcase by pretending it was made of actual dinosaur bones or whatever. Anyway, yeah…it took a while to figure out exactly what to do with your ashes but I knew we’d have to listen to this Brian Eno song while doing something with them some point. You always said you wanted it at your funeral or whatever…Brian Eno and good olives and…well, lots of booze. So yeah.