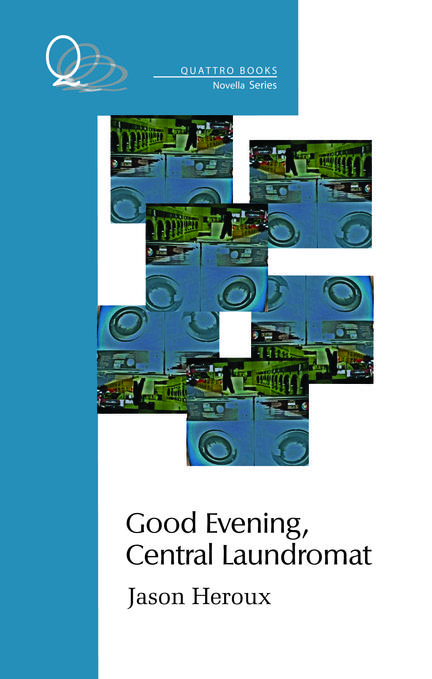 What if your best friend’s ghost was still hanging around town? What if your girlfriend mysteriously lost her voice and didn’t seem to care? What if a strangely independent pigeon started following you wherever you went? These are the questions plaguing Cameron Delco as he struggles to get to the bottom of a bizarre mystery that begins with a fortune-teller in a late night Laundromat and ends somewhere inside a dusty lint trap. A book where the present moment is like a dream and the distant past feels like an unfinished work-in-progress,Good Evening, Central Laundromat is about learning how to separate the lights from the darks in life, death, and laundry.

Jason Heroux is the author of two novels, Good Evening, Central Laundromat (shortlisted for the 2011 RELIT Novel award), and We Wish You a Happy Killday, and four poetry collections, Memoirs of an Alias, Emergency Hallelujah, Natural Capital (shortlisted for the 2013 RELIT Poetry award), and most recently Hard Work Cheering Up Sad Machines (Mansfield Press, 2016). His poetry has appeared in chapbooks and magazines in Canada, the US, Belgium, France, and Italy, and is featured in the anthologies Best Canadian Poetry in English 2008 and 2011 and 2016. He lives in Kingston, Ontario.

ONE SUMMER NIGHT NEAR CLOSING TIME an old hunchbacked woman entered my girlfriend’s Laundromat and walked over to the counter, tilting her head sideways to look at the cigarette display rack. Viola sat behind the counter sorting receipts while I crouched near the window emptying quarters from the Double-Load Thor machines. “How much for a small pack of smokes?” the woman asked. “Seven dollars,” Viola whispered. She had a sore throat and her scratched, bruised voice sounded like a distant echo of itself. “I’ll buy one. But I don’t have any cash on me at the moment,” the woman said. “Give me a pack and I’ll pay you tomorrow.” “Sorry, we don’t accept credit.” “That’s okay sweetheart. That’s smart.” The woman pointed a finger at Viola. “You’re in business. You think like a businesswoman, I can tell. I’m in business too. I read people’s palms, that’s my business.” I knelt in front of the last Thor machine, struggling with the coin slot. The Thor key was old and worn, and it took me longer and longer each night to unlock the slots and empty the quarters. The Belgian-made machines were energy-efficient front load washers that held more clothes than the usual Maytag models. The only problem was they were no longer being manufactured, so there were no replacement parts available. I remembered when Viola bought the Laundromat five years ago there were fifteen Thor machines all along the wall, and now there were only nine. Every time one died we dismantled and stripped it for parts to keep the others alive. I emptied the final coin slot, locked it back in place, and then stood up and looked over at the counter and saw Viola and the hunchbacked woman were gone. I walked to the counter with the Tupperware container of quarters and noticed the back hallway door leading to the storage room was open. The telephone rang, startling me. I put the container of quarters on the counter and reached over and picked up the phone. “Good evening, Central Laundromat,” I said. A faint humming sound buzzed at the other end of the line but no one was there. I hung up. A moment later I heard footsteps in the hall and Viola and the woman stepped through the doorway. Viola walked behind the counter, reached up for a pack of Player’s Light cigarettes, and placed it in the woman’s open hand. “Don’t forget what I told you sweetheart,” the old woman said. “I’ll stop in from time to time to check on you and see how things are going. I care about you. Everyone calls me Mama. I’m everyone’s mother. Ask anyone and they’ll tell you.” The old woman walked to the front door and closed it quietly behind her as she left. I looked at Viola. “Did she read your palm?” “Yeah,” she whispered, looking at her watch. “It’s already after ten. Did you finish emptying all the machines?” “They’re all done. But what did she say?” “I’ll tell you later.” She took the keys out of her pocket and walked to the front door and locked it. She flipped the “Closed” sign around in the window so that the “Open” side faced in.

Other titles by Jason Heroux

Memoirs of an Alias