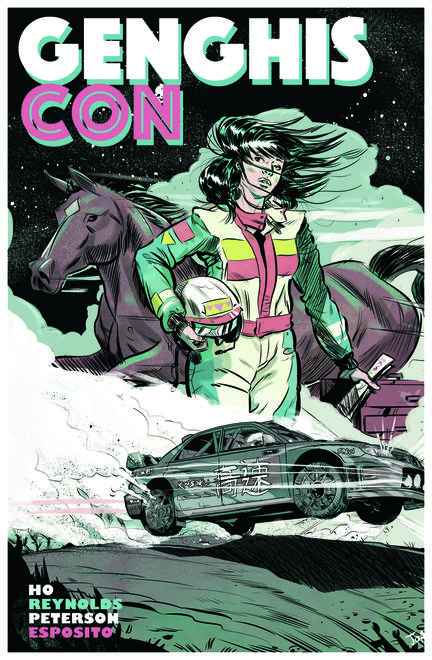 Genghis Con is an unusual story: a crime and family drama crossed with illegal international road racing, told with humour and drive. It features a biracial heroine and it touches on issues of racial identity, sibling rivalry, and the weight of memory. It will appeal to adults and young adults. It's been a passion project created by two Canadian writers with a Canadian artist, colourist, and book designer. Genghis Con is the story of guilt-ridden grifter, Alexis, who seeks redemption for herself and justice for her sister, Abigail, by taking part in a win or die rally race from England into the mountains of Mongolia. Along the way, she must team up with her erstwhile lover and fend off attacks from parties unknow, including one particularly ruthless gangster. Meanwhile, the spirit of a mysterious Mongol warrior haunts Alexis on her journey.

Yi-Sung Oliver Ho is a professional writer and editor. He's published several books, and he's written comics that have appeared in the Toronto Comics Anthology Vol. 1 and Vol. 2, and in the anthologies Holmes Incorporated, Low Society, and Heady Mental. His writing has also appeared in publications that include Carousel, Descant, The New Quarterly, and PopMatters. Currently, he works as an editor at the Centre for Addiction and Mental Health.

Daniel Reynolds is a writer from Toronto, Canada. He's the Editor-in-Chief of SB Nation's Raptors HQ and a film critic at Brief Take. His comic writing includes Point Man, an all-NBA heist story, plus stories in the Toronto Comics Anthology (Vols. 1, 2, and 5), Strange Romance (Vols. 1 and 2), and Hogtown Horror.