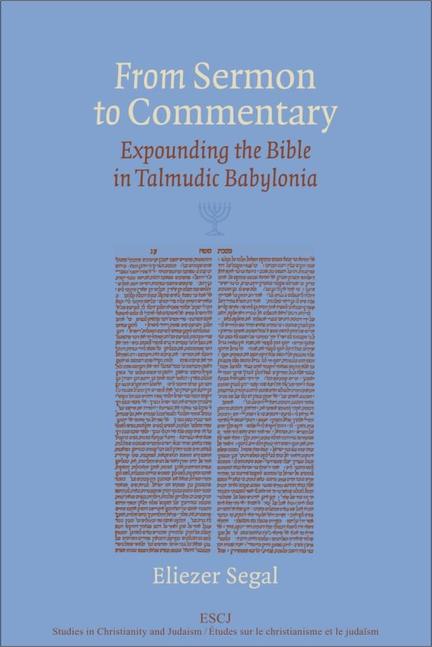 The Bible has always been vital to Jewish religious life, and it has been expounded in diverse ways. Perhaps the most influential body of Jewish biblical interpretation is the Midrash that was produced by expositors during the first five centuries CE. Many such teachings are collected in the Babylonian Talmud, the monumental compendium of Jewish law and lore that was accepted as the definitive statement of Jewish oral tradition for subsequent generations.

However, many of the Talmud’s interpretations of biblical passages appear bizarre or pointless. From Sermon to Commentary: Expounding the Bible in Talmudic Babylonia tries to explain this phenomenon by carefully examining representative passages from a variety of methodological approaches, paying particular attention to comparisons with Midrash composed in the Land of Israel.

Based on this investigation, Eliezer Segal argues that the Babylonian sages were utilizing discourses that had originated in Israel as rhetorical sermons in which biblical interpretation was being employed in an imaginative, literary manner, usually based on the interplay between two or more texts from different books of the Bible. Because they did not possess their own tradition of homiletic preaching, the Babylonian rabbis interpreted these comments without regard for their rhetorical conventions, as if they were exegetical commentaries, resulting in the distinctive, puzzling character of Babylonian Midrash.

Eliezer Segal is a professor of religious studies at the University of Calgary. A native of Montreal, he holds a PhD in rabbinics from the Hebrew University of Jerusalem. His primary areas of research include Talmudic literature, Jewish law and homiletics, and comparative biblical interpretation. His publications include scholarly monographs, popular scholarship, a children’s book, and many articles and book chapters.

Other titles by Eliezer Segal

In Those Days, At This Time

Holiness and History in the Jewish Calendar

Ask Now of the Days that are Past