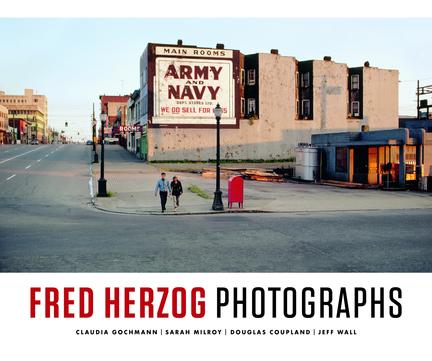 The definitive book about the stunning oeuvre of a pioneer of colour photography -- Vancouver's Fred Herzog.

For more than five decades, Fred Herzog has focused his lens on street life, and his striking colour photographs -- of vacant lots, second-hand shops, neon signs and working-class people -- evoke nostalgia in an older generation and inspire wide-eyed revelation in a younger one.

The images that we now consider iconic once relegated Herzog to the margins: his bold use of colour was unusual in the 1950s and '60s, a time when art photography was almost exclusively associated with black-and-white imagery. Fred Herzog has worked with Kodachrome slide film for over 50 years, but only in the past few years has technology allowed him to make archival pigment photographic prints of exceptional colour and intensity.

Fred Herzog was born in 1930 in Germany and immigrated to Canada in 1952, spending some time in Toronto and Montreal before arriving in Vancouver in 1953. After a three-year stint as a sea man, he begin working as a medical photographer at Vancouver's St. Paul's Hospital, while still finding time to hone his art, choosing colour film as a way to capture what he saw as the city's vitality. In the late 1960s and early 1970s, Herzog taught in the fine arts departments at the University of British Columbia and Simon Fraser University. He has participated in exhibitions across the country -- including at the National Gallery of Canada, Presentation House Gallery, Vancouver Art Gallery and UBC Fine Arts Gallery (now the Morris and Helen Belkin Art Gallery) -- and around the world, from the Laurence Miller Gallery in New York to the C/O Berlin in Germany.

Douglas Coupland was born on a Canadian NATO base in Germany and raised in Vancouver, where he still resides. Among his best-selling novels are Generation X, Shampoo Planet, Polaroids From The Dead, Microserfs, Miss Wyoming, Hey Nostradamus! and Eleanor Rigby, altogether in print in some 40 countries. Coupland also exhibits his sculpture in galleries around the world, indulging in design experiments that include everything from launching collections of furniture to futurological consulting for Stephen Spielberg.

Sarah Milroy is a Toronto writer and art critic. She served as editor and publisher of Canadian Art magazine (1991-96) and as art critic of the Globe and Mail (2001-10). Milroy has contributed to publications on the work of Gathie Falk, Jack Chambers, Greg Curnoe and Fred Herzog, and is a regular contributor to Canadian Art, Border Crossings and The Walrus.

Jeff Wall, a key figure in Vancouver's art scene since the early 1970s, is best known for his large-scale back-lit cibachrome photographs and art-historical writing. He has published essays on Dan Graham, Rodney Graham, Roy Arden, Ken Lum, Stephen Balkenhol, On Kawara, and other contemporary artists. He is an Officer of the Order of Canada and was awarded the Audain Prize for Lifetime Achievement in the visual arts.

Claudia Gochmann is an art historian and writer based in Berlin. She is an expert on the work of Lee Friedlander and William Eggleston and has written for broadcast television and such publications as Photography Now.

"An unforgettable collection by a photographer, now 81, who has spent half a century documenting workaday Vancouver life -- not the gleaming towers of commerce but the dusty streets, neon lights and storefront windows that define our lives in more important ways. The eye wants to linger on every page. An unforgettable visit to Canada when our urban centres were still small towns. With commentary by Claudia Gochmann, Sarah Milroy, Douglas Coupland and Jeff Wall."

"Fred Herzog: Photographs...is a pictorial history of a time and place that no longer exist, but it's also an artist's view and it does one of the things artists do best: it helps us to see. This is a book that takes time to "read," as every image is a world in itself. Herzog's love of colour, especially faded colour, is evident."

"Can't afford to give your friend the Fred Herzog print sheís been coveting for that spot above the mantel? No fear: help her dress the coffee table instead, with a tome sheís sure to treasure: Fred Herzog: Photographs. This new book of Herzog's iconic photographic images of Vancouver, originally captured in Kodachrome slide film, offers glimpses of daily life on Vancouver's gritty and gorgeous streets in the 1950s and 1960s."

"This collection of photographs, drawn from a life's work of 100,000 images, is impressive. Ranging from portraits of curious people to images of muted neon signs, street corners, and barbershops, these photographs are fresh, original, and captivating. Anyone interested in photography, from amateurs to serious professionals and especially artists, will appreciate this superb book."

"His wonderful and remarkable street pictures are the subject of a new monograph called Fred Herzog Photographs, published this month by Douglas & McIntyre. The book offers deep insight into the photographer's colour work, which was made during a time when serious, documentary and fine art photography was still being shot in black and white...Luckily for photography fans, (this) is the most comprehensive (of his books) yet and features written essays by Douglas Coupland and fellow Vancouver-based photographer Jeff Wall..."

"...beautiful enough to be a substitute for, and alternative to, owning the prints themselves."

"For more than 50 years, Fred Herzog focused his lens on street life in Vancouver, revolutionizing art photography. This is the definitive collection of his work, providing a striking look at city life in the '50s and '60s that will be nostalgic to some and illuminating to others. Four titans of the arts community -- including Douglas Coupland and Jeff Wall -- provide an authoritative accompanying text."

"Fred Herzog Photographs, the second major book on this artist issued by Douglas & McIntyre, comprehends the range of Herzog's vision...Of the four essays in the book, Milroy's is the most comprehensive. A beautifully written critical biography, it describes the arc of Herzog's life and career, from his wartime childhood in Stuttgart to his discovery of his true subject in Vancouver, and his long, dedicated years of documenting the city during his off hours while supporting himself and his family as a medical photographer."

"This is a book that takes time to 'read,' as every image is a world in itself."

"Fred Herzog: Photographs, a beautiful collection of the pioneering photographer's images of Vancouver streets as they were a half-century ago."

"Fred Herzog Photographs celebrates a photographer who favoured colour slides at a time when black-and-white film was the sanctified medium for serious photographic art...Fred Herzog took to the streets of his adopted hometown -- Vancouver -- and produced quirky, insightful images on Kodachrome of pedestrians, buildings, billboards, bridges and docks."

"Canada's own Robert Frank, Fred Herzog was a medical photographer working in Vancouver when he shot most of the material in this book. His detailed work, spanning the 1950s and 1960s, vividly evokes in delicious Kodachrome the multicultural, working-class populace that thronged the city's neon-lit streets."

Other titles by Douglas Coupland

Musings on a Generation that Refuses to Go Quietly

Vancouver in the Seventies

Photos from a Decade that Changed the City

Paddle Against the Flow

Lessons on Life from Doers, Creators, and Culture-Shakers

Ideas, Essays, and Stories for the Increasingly Real Twenty-First Century

Other titles by Sarah Milroy

In His Own Voice

The Sobey Family and Canadian Art

The Group of Seven and Tom Thomson

The Art of Lionel LeMoine FitzGerald

From the Forest to the Sea

Other titles by Jeff Wall