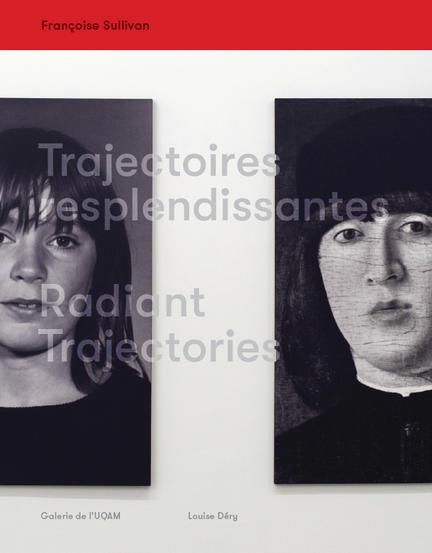 Since the 1940s, Françoise Sullivan has created a vibrant and voluminous oeuvre of remarkable versatility. Constantly renewed by a rare inventiveness, her work has always remained faithful to the principles of freedom and engagement that she embraced during her early career in the Automatiste movement. Inspired by the great European and Native North American mythological traditions, passionate about art and poetry, and influenced by the time she spent in New York, Italy, Ireland and Greece, Sullivan has, in her boundless curiosity, never stopped experimenting with form and colour, gesture and movement, figuration and abstraction - not only in sculpture, performance, dance and photography, but also most decisively in painting. Sullivan’s trajectories, so radiant and and so liberating, enlighten our recent history as well as form an integral part of our present. This splendidly illustrated publication features dozens of works and documents that are contextualized and elucidated by an original essay that revisits the multiple trajectories of the artist's singular career. As much an reference book as monograph, the book also brings together several of Françoise Sullivan's own writings, some of which have never before been published. She who, in 2017, still works in her studio every day and continues to think - and think of herself - in and through art, invites us to participate in the vital relationship between art, memory and the world around us. In English and French.

Françoise Sullivan was born in Montréal where she initially studied at the city’s École des beaux-arts. In 1944, she went to New York and took courses in modern dance with Franziska Boas, Martha Graham and Louis Horst. Along with Paul-Émile Borduas, she was one of the founding members of the avant-garde Automatiste movement and one of the signatories of that group’s 1948 manifesto, the Refus global, which featured her essay La danse et l'espoir (Dance and Hope). While continuing to choreograph, she learned the fundamentals of metal welding and in 1963 received the Prix du Québec in sculpture. In the late 1960s, Sullivan experimented with plexiglass and in 1976, collaborated with sculptor David Moore on several projects. By the 1980s, Sullivan had returned to painting and between 1982 and 1994 produced several series, which are regarded as the culmination of her work in the medium. Sullivan's work has been shown at numerous solo and group exhibitions, including retrospectives at the Musée national des beaux-arts du Québec (1993) and the Montreal Museum of Fine Arts (2003). In 2005, she was awarded the Governor General's Award in Visual and Media Arts for her artistic achievements

Other titles by Louise Déry

by (author) Louise Déry
other direction by Françoise Sullivan

Other titles by Françoise Sullivan

by (author) Louise Déry
other direction by Françoise Sullivan