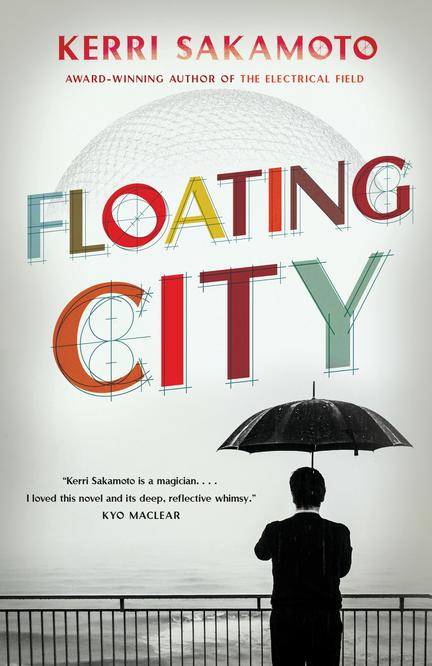 Citizen Kane reimagined, a novel about ambition and the relentless desire to belong, from the author of the Commonwealth Prize-winning and Governor General's Literary Award-nominated The Electrical Field.

Frankie Hanesaka isn't afraid of a little hard work. An industrious boy, if haunted by the mysterious figures of his mother's past in Japan, he grows up in a floating house in the harbour of Port Alberni, BC. With all the Japanese bachelors passing through town to work in the logging camps and lumber mills, maybe he could build a hotel on the water, too. Make a few dollars. But then the war comes, and Frankie finds himself in a mountain internment camp, his small dreams of success dashed by the great tides of history.
After the war, Frankie tries his luck in Toronto, where possibility awaits in the form of a patron who teaches him how to turn effort into money, and a starry-eyed architect who teaches Frankie something harder to come by: the ability to dream big. Buckminster Fuller's role as Frankie's outsized spiritual mentor is one of just many real-life touchstones and extraordinary points of colour in this fairytale-like story about family, ambition and the costs of turning our backs on history and home.

KERRI SAKAMOTO debuted as a novelist in 1998 with The Electrical Field, a finalist for a slew of awards--the Governor General's Award, the Kiriyama Pacific Rim Book Prize and the IMPAC Dublin Literary Award--and winner of the Commonwealth Writers' Prize for Best First Book and the Canada-Japan Literary Award. The Toronto Star said "Kerri Sakamoto represents a major new force in the landscape of Canadian fiction." Her second novel, One Hundred Million Hearts, appeared in 2003 to critical acclaim.

Winner of the 2018 Canada-Japan Literary Award
Shortlisted for the 2018 Toronto Book Awards
A NOW (Toronto) Top Ten Book of the Year
“Floating City pulls us into a narrative traversing generations, waterways, legends, and history. The ambition coursing through Frankie Hanasaka and his story of success is fostered by chance meetings and tempered by magic, myth, and the watchful eyes of his family. With an impressive agility to collage a range of inner and outer voices, Kerri Sakamoto weaves together a life from the shores of Port Alberni, to the shacks of Tashme, to the glimmering towers of Toronto and leaves us pondering how fortunes are made.” —2018 Canada Council for the Arts Peer Assessment Committee for the Canada-Japan Literary Awards

“Written in a whimsically poetic and almost magical tone, Floating City explores themes of hope, chasing dreams, struggle, and the need to belong. When the book ends, readers will feel nothing short of reflective upon reading the final chapter.” —Jemicah Colleen Marasigan, This Magazine

“All that is solid melts into prose in Kerri Sakamoto’s entrancing new novel. The raw pain of Canada’s Japanese internment, the earth and concrete that gave rise to modern Toronto, even the flesh and bone of our mortal bodies, she weaves into a soaring narrative of vast ideas and acute sensation. Frankie Hanesaka is a completely original creation, and Floating City a marvel.” —Cameron Bailey, Artistic Director, Toronto International Film Festival

“Kerri Sakamoto is a magician. The way she handles language is wizardly. Her gifts for imagery dazzle. She has written a tender, sad, shimmering story about a boy named Frankie who dares to dream and aspire in an unwelcoming world. Floating City is as vibrant as a fairy tale, as aching and rueful as a Japanese enka song. I loved this novel and its deep, reflective whimsy. It floated me to a spellbinding place of broken hopes and blooming magic.” —Kyo Maclear, #1 bestselling author of Birds, Art, Life

“Floating City is a boldly conceived and richly provocative tale of one man’s dreams, schemes, and unbridled striving for destiny. You will never look at Toronto’s waterfront or skyline again without thinking of the meaning of home.” —Lynne Kutsukake, author of The Translation of Love

Really enjoyed the historical detail in this; the Nisei experience on Canada's west coast is fascinating, and I've only read a few perspectives on it. Authentic-feeling story of a Canadian-born son of Japanese parents from the 1930s-1980s. Starts with childhood experiences living on a floating house on the BC coast and follows through the internment and mountain camps of WWII, setting out to Toronto in the postwar period to build a life, dreaming and working toward success, and dealing with the fallout of letting ambition lead to selfishness. There's a strong fantastic/spiritual/magical realist element throughout, based on legends, dreams and altered perceptions. Very firmly in the literary fiction tradition, with some themes that don't entirely link up. I read a lot of genre fiction and YA, so I wasn't really up for the dark period in the last third, but I liked the earlier bits and the resolution. On the whole, less dark and depraved than a lot of adult literary fiction; it manages to convey a sense of hope, optimism and potential throughout. Very cool Canadian perspective, and it feels authentic enough that I was sad there aren't floating cities in Toronto's harbour yet.

Other titles by Kerri Sakamoto