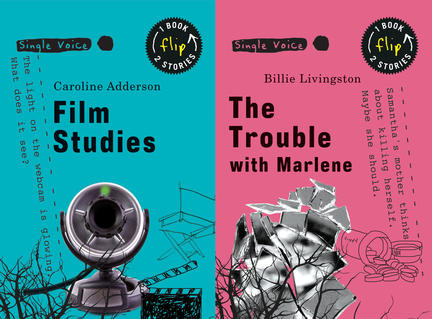 In Film Studies, 15-year-old Cass is so cool she’s cold. That’s what people think. But she struggles to decide what role to play in life — an act that swallows her whole. It’s her director father, long absent, who leaves her struggling for an identity. The one thing she knows for sure is that she’s fed up with her mother’s ever-changing boyfriends. Then along comes a school film project and things get strange. But so what if the boy she likes films her twirling around half naked? Her father makes porn, doesn’t he? If you act like Marlene, you end up like Marlene — messed up, lonely and broke. No wonder Samantha rejects her mother’s lifestyle.

In The Trouble with Marlene, mother and daughter share one thing — thoughts of suicide. Marlene never stops talking about it, but for Samantha, it’s a private affair. There’s one other private thought for Samantha: putting a pillow over her mother’s face and bringing the madness to an end. How far is she prepared to take her fantasy?

Billie Livingston has published short fiction and poetry in Canada, the U.S., the U.K. and Australia. She is the author of Going Down Swinging (Random House, 2000) and winner of This Magazine's 2000 Short Story Contest. Born in Toronto, Billie now lives in Vancouver where she writes, works in the film industry, and collaborates on various projects as a member of The Seven Sisters Writing Group(www.sevensisterswritinggroup.com).

And How Punctuation Saved It

Other titles by Billie Livingston

The Crooked Heart of Mercy

The Trouble with Marlene

The Chick at the Back of the Church