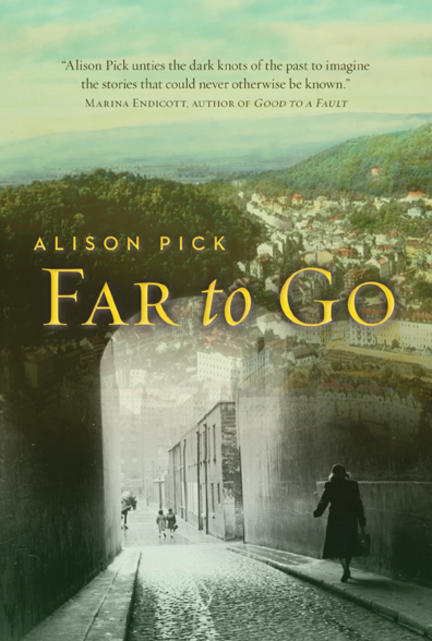 In Far to Go, one of our most accomplished young writers takes us inside the world of an affluent Jewish family in Prague during the lead-up to Hitler's invasion of Czechoslovakia.

In 1939, Pavel and Anneliese Bauer are secular Jews whose lives are turned upside down by the arrival of Hitler. They are unable to leave the country in time to avoid deportation, but they do manage to get their six-year-old son Pepik a place on a Kindertransport. Meanwhile, a fascinating and compelling present-day strand in the story slowly reveals the unexpected fates of each of the Bauers. Through a series of surprising twists, Pick leads us to ask: What does it mean to cling to identity in the face of persecution? And what are the consequences if you attempt to change your identity?

Inspired by the harrowing five-year journey Alison Pick's own grandparents embarked upon from their native Czechoslovakia to Canada during the Second World War, Far to Go is an epic historical novel that traces one family's journey through these tumultuous and traumatic events. A layered, beautifully written, moving, and suspenseful story by one of our rising literary stars.

Alison Pick's most recent novel is Far to Go, winner of the Canadian Jewish Book Award for fiction and nominated for the Man Booker Prize. Rights have been sold internationally and the book has been optioned for film. Pick was the 2002 Bronwen Wallace Award winner for most promising unpublished writer under 35 in Canada. She has published one other novel, The Sweet Edge, and two poetry collections, The Dream World and Question & Answer. She is currently on the Faculty of the Humber School for Writers and the Banff Centre for the Arts. Her memoir Between Gods, from which this essay is loosely excerpted, is forthcoming from Doubleday in 2014.

Pick has a knack for narrative and an ear for the authentic...a beautiful, haunting story.

...Alison Pick has crafted a powerful story...Far To Go demonstrates the devastation of war - and the effects it has on the children who grow up through it - without going anywhere near a battlefield.

. . . [a] spare, powerful novel . . . it is bewildered six-year-old Pepik, and his harrowing journey, that encapsulates the loss and hope and heartbreak that is the life-blood of this extraordinary story.

Far to Go is a worthwhile and accomplished, if not flawless, novel.

Far to Go is a breath-taking, heart-breaking novel, and Alison Pick is a beautiful writer.

A heart-rending story about a decision that shapes the lives of both those on the train to freedom and those left behind.

...the Holocaust persists in the literary imagination and through the refining fire of fiction a new generation confronts its own version of what it means to be human

...what sets Pick apart are her modern chapters in between her looks into the past.

An intriguing experiment in the art of storytelling.

The writing in Far to Go is clean, crisp and unencumbered. Pick never dwells for too long in an image or metaphor, and she creates small moments that are both lovely and frightening.

Other titles by Alison Pick

Strangers with the Same Dream