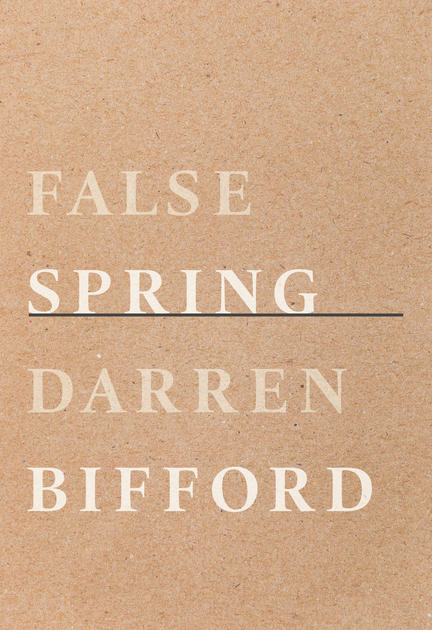 Poems about commitment and catastrophe, from a voice of intense lyrical skepticism and wonderful tonal mobility.

False Spring, Darren Bifford's second collection of poetry, is a book largely concerned with various forms of collapse and cultural disintegration. These are poems of considerable weight and great energy at once, so that the impression is of a large-muscled animal that is also nimble. They are the work of an engaged moral imagination, alive with the conceptual issues of the times embedded in experience; their "philosophical" import speaks out of the poetic act itself.

Bifford seems always in active conversation, dialogue, dispute with figures from literary and classical traditions. There is also a set of "translations" of a Polish poet of Bifford's invention, which permit him to write, Pessoa-like, in another voice — even if it shares a few features (as a disillusioned Pole writing of general collapse) with his own.

While non-confessional in intent, the poems do attend to the inner pitch — like a white noise — which the events of the world sound. The book thus contends with a nostalgia for old forms without belying any sustained confidence in their veracity.

It's like in a cartoon, all the forest fires
Leapfrogging fires. Small civilizations caught
In the dirty, say they're sorry and plead their cases
Ad hoc and brilliantly. "Scared as shit"
Is my summary.
(from "Habitable Earth in the Last Analysis")

Darren Bifford is the author of the chapbooks Wolf Hunter (Cactus Press, 2010), Hermit Crab (Baseline Press, 2014), and The Age of Revolution (Anstruther Press, 2017). His first full-length collection was Wedding in Fire Country (Nightwood Editions, 2012). He co-edited (with Warren Heiti) Chamber Music: The Poetry of Jan Zwicky (Wilfred Laurier Press, 2015). Originally from Summerland, BC, he lived and taught in Montreal for many years, where he also coordinated the Atwater Poetry Project. He has recently moved with his family to Penticton, BC.

Other titles by Darren Bifford

The Poetry of Jan Zwicky